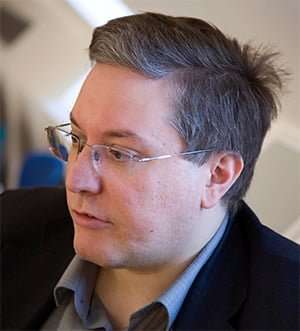 Julian Anderson is a busy man. He is currently composer-in-residence with the London Philharmonic, and this Julian Anderson Day of two concerts and a talk marked the beginning of his three-year residency at Wigmore Hall – and the premiere at ENO of his new opera Thebans is a mere six months away.

Before the evening concert, the 46-year-old composer gave a lucid, engagingly wry talk about his relationship with music, making the point that we might like to think about our expectations of music – from student days, I recall Jonathan Harvey covering similar territory in his composer’s fascination with aural memory being the deciding factor in justifying the length and unity of a piece. Anderson also talked about his resistance to specific artistic dogmas and pigeonholing – in his career he has been associated with the French spectralists and has been compared with Debussy – and this is borne out by the strong personality of his music.Another Prayer (2012), a ten-minute piece for solo violin, has a vivid, folk quality, with liberal bending of pitch and harmonics, eerie glissandos and bowing sound-effects, played with great vitality by András Keller. The title inevitably created expectations, sustained by the atmospheric evaporation of tone towards the end, but it was just as satisfying as an abstract narrative. 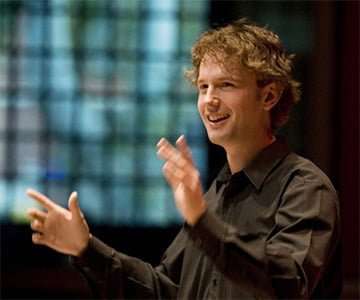 Hans Abrahamsen, the Danish composer who has also distanced himself from avant-garde card-carrying, composed Walden (In the woods, 1978), inspired by Thoreau’s back-to-nature simplifying of life (he lived in the woods for two years). Beautifully scored for wind quintet, it has a central role for horn, and the music is saturated with the sounds of German romanticism. Not so much a tale as a sequence of four short movements, the piece evokes the randomness of nature with uncanny precision, turning the comfortable soundworld of Weber and early Wagner into something blank and remote.

The rhythmic flow and mercurial, Berio-like lurches into the momentarily familiar in Anderson’s Tiramisu (1994) were instantly attractive, and the ten instrumentalists from the Aurora Orchestra (four strings, four winds, harp, percussion) expertly guided by Nicholas Collon relished their various groupings as the music progressed to a lyrical coda.The Aurora’s playing was equally impressive in the two published movements From a Divertimento (1969-70) by Salvatore Sciarrino. The delicacy of the writing is phenomenal, and the skittering, rustling and blowing catch sound on the very edge of evanescence, its shadows of theme just about defining it as music. Its shimmering, breathing quality is unlike anything I’ve heard coming from ‘real’ musicians.

Anderson’s The Comedy of Change (2009) is a dance piece written for Ballet Rambert, a virtuosic realisation of the title that for brief moments seems to divine a plan behind the tumult of endless variation, and there is a sublime quality to the music that recalls Messiaen, but without the latter’s more specific labelling. Change, a particularly contemporary fact of life, is a concept particularly suited to music, and found here its highly-charged, brilliant expression.