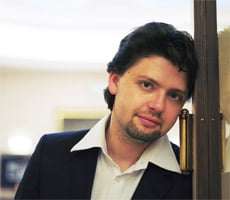 Brahms consulted his friend, the violinist Joseph Joachim, for advice when he embarked on composing his first major works for violin – the Concerto and the G major Sonata. Both pieces were started in 1878, but the sweetly lyrical Sonata’s emotional realm is far removed from the stormy Concerto. Julian Rachlin’s opening phrases were quietly serene, with big shape but still contained within an emotional boundary. Itamar Golan matched Rachlin’s in all ways except for the scale, his unlimited volume frequently overpowering the violin.

Rachlin’s 1704 “Ex-Liebig” Stradivarius was disappointing, sounding like an inferior instrument with weak tone in the low end, shrillness on top, and its lovely mid-range never yielding a huge sound even when bowed forcefully. However, the affective range and carefully nuanced interpretation Rachlin coaxed from the instrument was a joy. In the Adagio he highlighted the negative spaces, with great attention paid to the cutting-off points of notes, allowing the silences to yield great pathos. His minimal use of vibrato made for an interesting haunting effect, although it was not as pleasing in tone as when he allowed the notes to resonate. The finale was light but intense, Rachlin forsaking grand gestures in favor of a more Classical style – understated but emotionally complex.

The F minor Viola Sonata, like its companion, was originally written for clarinet. The same balance and tonal problems occurred here, with Rachlin’s strong bow-pressure translating into a pinched sound from his instrument, and Golan’s dynamic remaining too loud. Yet both players brought a natural musicality and passion to the work, the emotional landscape multifaceted and intriguing. In the Andante un poco adagio, the viola’s sound became richer, and in the Allegretto grazioso the lightness still seemed affected by the previous angst. Rachlin’s spiccato was crunchy and harsh in the Vivace, but his instrument’s timbre continued to open up and improve, with fleeting moments of exceptional beauty.

Brahms’s friend Elisabeth von Herzogenberg described the A major Violin Sonata as being “constructed in the plainest possible way from ideas at once striking and simple”. Rachlin’s technique now seemed better suited to his return to the violin. In the Allegro amabile, he created a few intensely passionate moments, but much of the movement featured understated dialogue between the two instruments. Golan’s dynamic level was less dominating here, his phrasing subtly attuned to Rachlin’s. The finest moments were the softer sections of the warmly sentimental finale, with both players creating character shifts and showing many different ways to depict emotional distress.

The ‘F-A-E’ Sonata is rarely heard in its entirety. Rachlin and Golan played the most frequently heard movement, Brahms’s Scherzo. (The remaining three movements were written by Robert Schumann and his student Albert Dietrich.) The cryptic title ‘F-A-E’ of this homage to Joachim stands for “Frei aber einsam” (free but lonely) – a reference to the violinist’s unhappiness at remaining a bachelor for the sake of his career. Rachlin was intense from the outset, and the lingering nuances in the second theme seemed spontaneously heartfelt. He drew a larger sound from the violin, which no longer seemed in the piano’s shadow. Neither player held back on passion – the result was thrilling.

Rachlin announced his Fritz Kreisler encores, Liebeslied and Liebesfreud, earning a chuckle for “We think it’s enough of Brahms”. He found a different color scheme for each piece. Liebeslied had many shades of sorrow, its opening melody warm and unforced, and the nostalgic second theme lighter, yet full of sentimentality. He took a quick tempo in Liebesfreud, and if not all double-stops were ringing, the intonation was impeccable and the music’s essential joy created a mood of celebration.