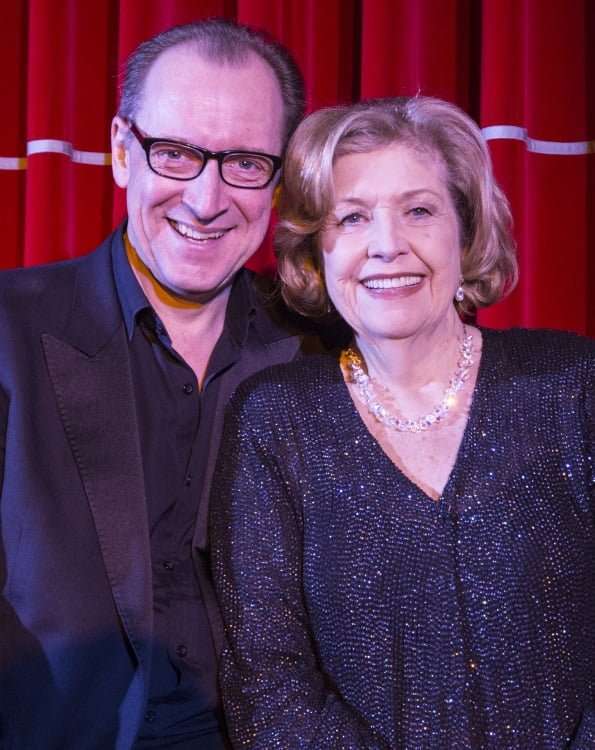 Anne Reid and Stefan Bednarczyk have both played successfully at The Crazy Coqs – Anne with her exquisite one-woman show, and Stefan with his sterling off-beat tribute to Noël Coward. Composers such as Coward are the life-blood of cabaret and their catalogues provide rich pickings. For their debut show together, Reid and Bednarczyk focus on the lyricists Betty Comden and Adolph Green, whose names are not perhaps as well known as those of Cole Porter, Johnny Mercer or others – an incredible fact when one considers that their shows include On The Town and Bells are Ringing, and their film scripts embrace Good News and the most admired of movie musicals (and arguably the funniest), Singin’ in the Rain.

This delightfully good-natured programme starts with Reid vamping at the piano, cueing some humorous by-play which sets the lighthearted mood of the evening to come. (After pointing out the exoticism of Stefan’s surname, Anne adds conspiratorially, “He comes from Leeds”.)

Throughout it is songs that dominate, starting with ‘New York, New York (a helluva town)’ but between them we hear fascinating facts about the lyric-writing pair, who also wrote sketches and librettos. One of their funniest sketches was a survey of famous literary works as they might be summarised by Reader’s Digest, and Reid’s mischievous sense of humour and superb timing are displayed in her resumé of Gone with the Wind.

Comden and Green came from entirely different backgrounds, with Comden’s comfortable and Green’s miserable, and from Wonderful Town, which they wrote with Leonard Bernstein, Bednarczyk resurrects a number, ‘The story of my life’, a wry tale of constant misfortune, which he suspects Green wrote from the heart. Written for Rosalind Russell to sing in the show, it was cut in previews and replaced with the more lighthearted ’A hundred easy ways’.

Comden and Green started as performers, heading a group called The Revuers (Judy Holliday was another member), and started writing as a financial necessity. On the Town was their breakthrough, and another number from the score, ‘Lucky to be me’, is deftly rendered by Reid, who excels in ballads – she is particularly persuasive when she glides from the gorgeous ‘Long before I knew you’ to the plaintive ‘The party’s over’, both composed by Jule Styne. Bednarczyk goes amusingly over the top with ‘Captain Hook’s waltz’ from Peter Pan (music by Styne), a number Green himself loved to camp up, and has similar fun as a vain actor joyfully proclaiming ‘My fortune is my face’, in another show Comden and Green wrote with Styne, Fade Out, Fade In.

Among the often-hilarious anecdotes, Anne and Stefan give an amusing account of the feud between Dolores Gray and Bert Lahr (“They hated each other”) when they starred in the revue, Two on the Aisle, from which they pluck two grand comedy songs, ‘If you hadn‘t. but you did’, a brilliantly inventive lyric (music by Styne), and ‘Catch our act at the Met’, a song satirising the efforts of the Metropolitan’s general manager Rudolf Bing to popularise opera – “We’ll be putting the wriggle into Rigolette” – rhymes with “at the Met”!

Also included are several songs from less-successful shows they wrote with Styne, Subways are for Sleeping and Hallelujah, Baby, but there are some gems from hit shows Peter Pan, Do Re Mi, Bells are Ringing and On the Town that just could not be left out, including ‘Never never land’, ‘Just in time’ (including the brief, seldom heard verse), ‘Make someone happy’, and the heart-wrenching ‘Some other time’, which comes at the climax of On the Town (MGM thought it far too sad to include in the film). “Where has the time all gone to?”, a query one might echo at the end of this civilised, witty, literate and entertaining evening.