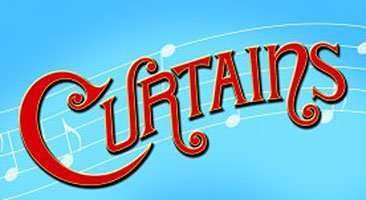 Two years ago Classical Source reviewed a student production of Curtains which seemed to fall short of the Guildhall School’s usual high standards. It was not due to the staging, but rather more to do with the material. Curtains, dubbed “the musical comedy whodunit”, had an unfortunate journey to the stage before it opened on Broadway in 2007.

While composer Kander and lyricist Ebb were still working on the project, Fred Ebb died (in 2004). The book of the show had been left unfinished by Peter Stone who had died in 2003. Rupert Holmes (famous for his musical of The Mystery of Edwin Drood) was called in to re-write the book and help with additional lyrics. The finished show was premiered in Los Angeles and, although it received mixed reviews, the producers decided to transfer it to Broadway the following year. It was to be one of the last Kander & Ebb theatre pieces, the other being The Scottsboro Boys staged in 2010.

Curtains had a good cast headed by David Hyde Pierce (Niles Crane in Frasier), Debra Monk, Karen Ziemba and Jill Paice. It had a reasonable run of over a year in New York, although that was not very long for a Kander & Ebb show. It was, however, nominated for eight Tony Awards. 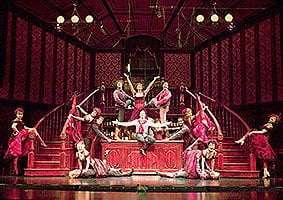 Apart from the 2010 Guildhall School production, Curtains has not appeared outside the USA until now. The show is set in 1959 (a great year for musicals on Broadway) when the Colonial Theatre in Boston, Massachusetts is playing host to a new show called Robbin’ Hood of the Old West, a musical Western take on the legendary hero, here called Rob Hood, with the leading lady’s role being Madame Marian. As the first night finale approaches, it is clear that Jessica Cranshaw, the faded film-star playing Marian, is no great shakes as an actress, singer or dancer. What is more she cannot remember her lines. As she takes her bow, she collapses and dies … and she’s not acting.

It is just as well that Jessica is now hors de combat, for the reviews are terrible. The show’s director, Christopher Belling, British and as egotistically camp as Christmas, decides to replace Jessica with Georgia Hendricks, the lyricist on the show, who is working with her ex-husband, composer Aaron Fox, only because she wants to be near Bobby Pepper, the leading man playing Rob Hood, who also happens to be Georgia’s ex-boyfriend. When Lieutenant Frank Cioffi arrives to investigate the death of Jessica, he concludes that she was murdered. As the plot moves on, there are more murders and so many red herrings that it is difficult to keep up with the action.

However, it is best to sit back and just enjoy Robert McWhir’s spirited production. Noted for staging big shows in the small Landor space, McWhir makes Curtains work despite its complicated plot and general silliness. Musically, and with Robbie O’Reilly’s energetic choreography, it becomes an amazing piece of stagecraft. The cast throws itself into the numbers with enormous gusto, making the songs seem better than they really are … but then cut-price Kander & Ebb is better than most composers’ music theatre songs of today. The use of reprises also adds extra humour to the proceedings as they go through ‘In the same boat’ at least six times. Mind you, it’s not all fun stuff, as there are some fine ballads too, witness ‘Thinking of him’ and ‘I miss the music’, the latter being very personal to Kander, his reaction to the death of Fred Ebb.

In the performance stakes Jeremy Legat as Frank Cioffi comes up with a very likeable but decidedly oddball cop, a music-theatre nut when he’s off-duty, who seems more interested in getting the show back on the road with himself as the leading man, than in solving the murders. Fiona O’Carroll as Georgia proves that her character is a better performer than she is a writer of lyrics. Leo Andrew as her opposite number Aaron has a great voice that does full justice to ‘I miss the music’. Buster Skeggs is a brilliant musical performer and as Carmen Bernstein, the shrewd but volatile co-producer of Robbin’ Hood with her husband Sidney (Mark Joy) she explains why she wants to transfer the show to New York only too well in the number ‘It’s a business’, because it’s all about money at the box-office.

Michael Webborn’s small band play large and he even gets to perform as Sasha Iljinsky, the MD for Robbin’ Hood of the Old West, the show within the show. If Curtains is not top-drawer, classic Kander & Ebb material, it is nonetheless hugely entertaining, proof that good musicals can be seen outside the West End.