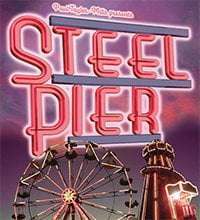 Inspired by the novel They Shoot Horses, Don’t They?, written by Horace McCoy in 1935 and graphically portraying one of the demeaning marathon dances that became a craze during the Depression, when couples would dance slavishly for days on end in order to win cash prizes, Steel Pier was originally produced on Broadway in 1997. Set on a pier in Atlantic City, its chief attraction is a score by John Kander and Fred Ebb, who had shown particular sympathy for the rhythms and styles of the 1930s in such shows as Flora the Red Menace, Cabaret, and Chicago. Although reviews were respectable, the run of Steel Pier was brief.

The Union Theatre is to be lauded for giving the European premiere in a production which splendidly evokes its era and setting with David Shields’s set of a smoky ballroom, garlanded with pink and yellow lights, and the gaudy bandstand all silver tinsel and sparkle, dominated by the large microphone through which radio listeners could hear the dance music and occasional entertainment from contestants. 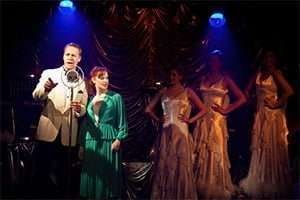 The central figure is veteran competitor Rita Racine, the first girl to kiss pioneer aviator Charles Lindbergh on his return to New York after flying solo to Paris. Now vowing that this marathon will be her last, Rita is secretly the wife of the event’s promoter, played by Ian Knauer in oily Dan Duryea mode as a Machiavellian manipulator who is determined to fully exploit Rita. The event’s contestants display various forms of desperation, bickering and back-stabbing; and, as the evening wears on, they are persuaded to take part in races round the hall and other novelties for the voyeuristic customers.

We were given bags of coins to throw to the dancers we preferred, all in fact superb, throwing themselves into Richard Jones’s energetic routines with frenetic commitment and flair. The ensemble dominate the show, though Sarah Galbraith is an appealing Rita and Aimee Atkinson gives a vibrant portrayal of a wearied contestant who has been around the block. She has the score’s one bona fide showstopper, ‘Everybody’s girl’, a raunchy and risqué account of sexual misdemeanours. Lisa-Anne Wood and Claire Louise Connolly are notable as obsessed contestants, Ian Kirton as a driven promoter and Jay Rincon as a young stunt pilot (another craze of the period) who crashes his plane at the show’s start, and becomes Rita’s partner, inevitably falling in love with her.

Unfortunately, the flavourless book does not allow much empathy for the principal characters, and the songs are not the help they should be – the catchiest, Bill’s ‘Second chance’, sounds like a Sondheim number and indicates that Kander and Ebb were losing their musical identity. The show is also saddled with a terrible ending – a sudden leap into mysticism that makes no sense. Whatever the Broadway original at this point, it has totally defeated the production team here. Whenever interest wanes, Angharad Sanders strikes up her punchy quintet and it’s time for the cast to echo one of the best numbers – ‘Everybody dance’.