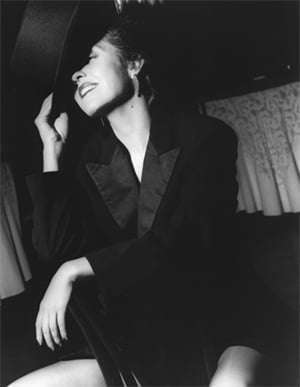 A striking figure, her statuesque beauty complemented by a clinging black evening gown, Karen Kohler makes her entrance into Crazy Coqs weaving her way through the audience as she delivers a bluesy rendition of Tom Waits’s ‘Anywhere I lay my head’. After a forceful version of the pounding waltz, ‘Padam, Padam’, she tells us that “Padam” was once another word for Paris, and that around 1895, when cabaret established its tentative roots, Paris and Berlin were rivals in claiming themselves the centre of the performing arts.

Kohler was born in Frankfurt to German parents but was raised in the USA from the age of five. She holds the countries’ passports, but her influences are many – she spent over a year living in Texas, has a special affinity for Europe, and her musical repertoire, though it favours German and French songs, includes bluegrass, folk, British and Yiddish. She has a particular rapport with the Weimar era, and the German tradition of satire and brutal cynicism, and like all the best cabaret artists, she relishes songs which tell a story, and she gives full value to the lyrics, whether in the original language or in translation.

Kohler’s programme is roughly chronological – from Brecht & Weill’s The Threepenny Opera (1928) to Leonard Cohen’s ‘If it be your will’ (1985), a challenging selection. From the former she delivers a raw interpretation of ‘Ballade von Mackie Messer’ (Mack the Knife), which she starts in a conspiratorial whisper. ‘Alles Schwindel’ is a driving, contemptuous number with music by one of her favourite composers, Mischa Spoliansky (best known, perhaps, for his later Hollywood credits), and from Friedrich Hollaender’s score for Josef von Sternberg’s film The Blue Angel, which established Marlene Dietrich, Kohler selects the little-known ‘Nimm dich in acht von blonden Fraun’ (Beware of blonde women) as well as the familiar ‘Ich bin von Kopf bis fuss’ (‘Falling in love again’), sung with alluring resignation. Kohler returns to Weill and Brecht for one of the most masochistic of love songs, ‘Surabaya Johnny’, conveying the pain and anger of an exploited woman, then sings her own translation of the beautiful ‘Schoener Gigolo’. As she sings the last note, her accompanist Leigh Thompson begins to sing a splendid rendition of the familiar English lyrics by Irving Caesar, ‘Just a gigolo’. Earlier he had joined Kohler in dialogue and song for The Blue Angel numbers. An accustomed figure at this venue, Thompson is celebrated as a fine pianist, and proves to be a fine singer also. He displays his sterling pianistic technique on Kohler’s successful decision to return ‘Bei mir bistu shein’ to its Jewish roots. It is a revelation for those of us familiar with the classic version by the Andrews Sisters, as Kohler sings its original Yiddish lyrics and Thompson provides a vamping tempo that evokes the rhythms of Fiddler on the Roof.

Noël Coward’s rarely heard ‘Twentieth Century Blues’, from Cavalcade, is Kohler’s sole British number, and from France she offers two Jacques Brel tunes, ‘Ne me quitte pas’ (If you go away) and the show-stopping waltz ‘Marieke’, plus the hit Edith Piaf penned with Marguerite Monot, ‘L’hymne à l’amour’. The Cohen song closes a stimulating evening that provides a fine display for the talents of Karen Kohler and her wide vocal range, and who is a potent example of Das Kabarett.