The Kensington Symphony Orchestra closed its 51st Season in fine style with a very attractive programme and excellent performances.

Dvořák’s Symphonic Variations is as concise as it is wide-ranging; think of a mood and it’s in there somewhere, so too much of the composer’s flora and fauna, dance rhythms, soulful lyricism and Slavonic exuberance. That this work isn’t played often says more about concert-planners’ reliance on the same handful of his works; here it was done proud by the KSO and Russell Keable who brought to it relish, affection and good humour. Whether Keable placing the violas outside-right (normally he has antiphonal violins) and bringing the double basses more into the centre of the platform contributed to the warmth and glow of the orchestral sound is difficult to say, but it was a beguiling and lucid account that left no doubt as to Dvořák’s mastery of invention and scoring. 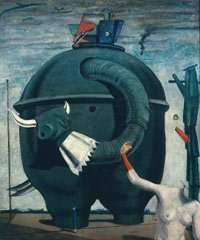 There followed another 20-minute work, the London premiere of John Woolrich’s The Elephant from Celebes. Scored for a standard large orchestra and first heard in 2005 courtesy of the Britten-Pears Orchestra under Paul Daniel, Woolrich’s inspiration comes from Max Ernst’s 1921 painting, “Celebes” (to be seen in Tate Modern), in which, to quote the composer (born 1954), is seen a “hulking creature, part machine and part elephant (standing) on a vast plain, gazing at a headless female nude.” He has more to say, but his orchestral piece isn’t (or doesn’t appear to be) programmatically representative of the painting; rather it is more of a starting point for a powerfully emotional symphonic creation that is “raw and wild … and finds magical places of stillness” (to borrow from Keable’s spoken introduction). It’s a dark, sinewy work that unleashes waves of sound and is also lightly nimble (in unexpected ways) as well as being no stranger to beauty; references to Birtwistle, Humphrey Searle and David Matthews came fleetingly and some ecstatic lyrical string-writing echoed Tippett, but the work is sustained by Woolrich’s own distinctiveness en route to an ambiguous close. It’s music one wants to hear again. The composer seemed very pleased with the account he had just heard; well done to the KSO for including this impressive piece.

Sibelius’s Fifth Symphony closed the concert. Keable gave a typically long-term reading in which direction was uppermost but there was no lack of ebb and flow. Particularly ear-catching was the violins’ agitated counterpoint to the bassoon’s soliloquy as the ‘upheaval’ into the second part of the first movement was approached; when arrived this scherzo-like section had a delightful lightness of touch as the music developed momentum and strength. The middle movement (marked Andante mosso, quasi allegetto), for all the pellucid soundworld conjured and the delicate playing, dragged slightly (more andante than allegretto) and had a couple of jerky tempo changes, but the finale was ideally judged, with a real sense of expanse at the ‘Swan-hymn’ (or whatever it’s best called!) and a thrilling cumulative coda that enjoyed excellent balance (the strings always heard under the growing brass tumult) and a sense of space and grandeur for the emphatic chords and enigmatic silences of the closing bars.

All three works had been very thoroughly rehearsed and were delivered with professionalism and enthusiasm. The KSO’s 2007/08 Season opens on 15 October with a return journey in Joby Talbot’s Hovercraft (a KSO commission from a few seasons back), Julian Anderson’s Stations of the Sun and Prokofiev’s Fifth Symphony, and continues on 27 November with an intriguing juxtaposition of Sibelius’s Fourth and Schubert’s ‘Great C major’.