Two magnificent symphonies were thoughtfully juxtaposed here – and brought off in fine style. 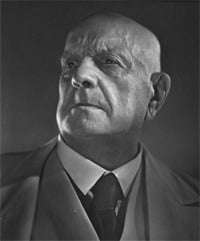 Sibelius’s Fourth (1911) is one of the greatest of symphonies – but not often heard. It is an exposing and searching work, one that confronts but doesn’t comfort – yet for all its blackness and enigma, and however subjective to its composer’s unhappy circumstances it may be, the work is also a masterly symphonic structure in absolute terms.

Russell Keable and his Kensington Symphony Orchestra gave an absorbing account, one with real edge to the opening from-the-depths summonses (double basses left-positioned and facing the audience, to advantage), Joseph Spooner’s cello solos both eloquent and desolate. Keable’s tempo for the first movement caught its ‘adagio’ tendencies while ensuring intensity and direction; the brass, although too loud, was a baleful presence. The succeeding scherzo-of-sorts had a bright incisiveness, but threatening clouds were on the horizon, too.

The heart of the work is the (true) slow movement, here cold and eerie (begun with a well-judged flute solo from Mike Copperwhite), the various woodwinds suggesting numerous oiseaux triste, Keable reserving a true ‘Il tempo largo’ for the strings’ declamations and implacable tread. The only thing not clarified enough was the motif that will be transformed into the opening of the finale, here launched attacca – there is a case for playing all four movements without a pause – to which a glockenspiel (some conductors use or add tubular bells) brought some brightness before conflict erupts (here with real ferocity) and the symphony stops rather than being induced to end – Keable doing as Sibelius tacitly instructs: nothing!

This outstanding performance was followed by a vital one of Schubert’s ‘Great C major’ (to distinguish it from Symphony No.6), begun with a ripe call to attention from two horns. The success of this rendition was in the indefatigable playing – Schubert’s demands on the string-players are considerable – and in maintaining momentum across the four movements without the work seeming relentless. The brass was better integrated, trombones noble and trumpets gleaming, and while disposing of the outer movements’ exposition repeats makes sense (especially in the finale), the scherzo really does need all of its repetitions observed.

Nevertheless, with antiphonal violins opening up the textures (as in the Sibelius, too), there was a powerful cogency and much considered variegation to ensure the symphony’s grand design as well as fully expressing the second movement’s blissful and trenchant episodes. In many ways, Keable’s conception reminded of Sir Adrian Boult’s masterly way with the music.