Russell Keable has been associated with the Kensington Symphony Orchestra for over 27 years. “It is a privilege for me”, he writes, “All these are people who could have gone on to play professionally but … chose to follow another career.” The KSO gives six public concerts a year – each one the outcome of six or seven evening rehearsals and a Sunday all-day session. “I can be very rude to the orchestra, but I make a joke of it and they listen.” The Kensington Symphony Orchestra is exciting and exact.

This fascinating, programme comprised a rarely performed work of high quality preceding a masterpiece, with – after the interval – a further but lesser-known masterpiece.

Fauré’s music is not easy to play. It is impressionistic and lightly scored, often with wisps of sounds that trail until they become part of the air. Yet the emotions are serious. In ‘Prélude’, the trailing was not altogether successful – a tricky matter of playing ever more softly, until virtually inaudible. In the following movements, the orchestra responded with finesse to Fauré’s delicate scoring, giving it an apposite underplayed strength and clarity of purpose – becoming graver and darker, though not heavier, after reaching the death of Mélisande. 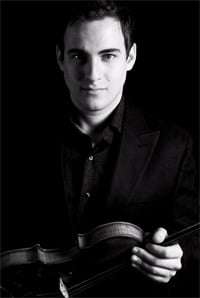 Beethoven’s Violin Concerto began with light, sprightly drumbeats, loud and definite. This was more a call to the dance-floor than the heralding, through majestic declaration, of some elevated spirituality to come. Jack Liebeck responded confidently to this approach, giving a clean, brisk account of his role – straightforward and assured. A notable feature of the orchestral playing was the strings’ buoyant surging whenever the music swelled, however momentarily. The Larghetto didn’t hang around. With measured spring, it seemed the prelude to an eagerly awaited prance which, when the finale arrived, had the lightness and vitality of an apotheosis to the whole experience. Without knowing so beforehand, this was, effectively, what we had come for – joyous and vital, demonstrating with infectious delight the experience of being alive.

What could follow that – and complement it? Not many would suggest Sibelius. Yet Keable did – and, in his hands, the decision was absolutely right. Under Keable’s inspiration – and, I surmise, enthusiasm – the KSO gave an outstanding performance of Sibelius’s Third Symphony, a ‘Cinderella’ in his output. Many interpretations of this work apologise for not being heavier and more profound. Floundering, they characterise the symphony as pastoral.

Keable unerringly identified positive aspects to the music’s lightness. The performance had spring and orchestral leanness. Keable was keenly aware, too, of those moments where the orchestral sound suddenly hardens and becomes darker. I recalled the work of Ingmar Bergman. Sibelius 3 has no slow movement. Magically, Keable lowered the tempo just slightly and gave us a twilit Dance of the Maidens, Nordic, among the pines and fireflies, with just enough seriousness to suggest that the ritual was ancient and with just enough bounce to suggest the young women’s sexual vitality. This splendid performance ended with three chords – strong, resounding and utterly decisive, a fitting close from Keable and his ardent KSO for a wholly original symphony.