Such is the very high standard of orchestral playing in this country, repertoire that thirty or so years ago would have seemed the exclusive province of fully professional orchestras is now tackled with considerable success by semi-professional or amateur orchestras. Such was the case with this Kensington Symphony Orchestra programme, which began with Korngold’s Violin Concerto. 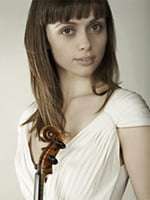 This magnificent composition – which has during the sixty years of its existence often been criticised for entirely the wrong, and therefore non-perceptive, reasons – has recently taken its rightful place in the repertoire. Ruth Palmer gave it a spellbinding performance; she played with profound understanding and is a violinist of truly exceptional quality. In this work, Korngold solved a problem that had beset composers for centuries – and still does – in a word, flexibility. Such rubato, especially in Romantic and post-Romantic music, is almost impossible to achieve without considerable rehearsal (which, of itself, does not guarantee success, and which can destroy the very spontaneity the composer and his performers seek). Korngold merely (!) notated such flexible ‘spontaneity’ into the very fabric of the music itself: in other words, by just playing the written notes, the performance appears wholly spontaneous, and flexible.

It is a major compositional achievement, often completely overlooked by the de haut en bas attitude which commentators have often brought to this composer’s work (some still do). The Concerto was movingly and impressively interpreted by Palmer and by Nicholas Collon, the Kensington Symphony Orchestra’s guest conductor for the evening, although in the first movement one wondered if the general volume of the orchestra might have been taken down a decibel or two to aid good balance, which was certainly better in the other two movements, only spoilt by the arrival, after the second one had begun, by a posse of latecomers, some of whom felt they had a right to interrupt the concentration of the audience by locating their allocated seats rather than occupying the empty seats nearest the entrance. This niggle aside, there is no doubt that this was a super performance which made a deep impression.

Shostakovich’s mighty Fourth Symphony, similarly ignored – for completely different reasons – for many years, and one of this composer’s greatest and most original orchestral pieces, received a performance of considerable insight, revealing that Collon knows this masterpiece very well, and equally knows how to get the best from this most excellent orchestra.