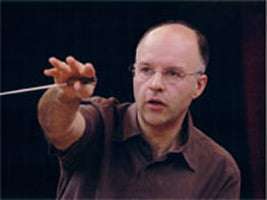 The opening concert of the Kensington Symphony Orchestra’s 53rd season began and ended with a visit to the Ballets Russes. The orchestra’s founder Leslie Head was in the audience and his successor Russell Keable has been music director for 25 years.

Keable has a natural chemistry with the audience, and introduced the characters of Manuel de Falla’s ballet before the bracing introduction, the orchestra joining in the “Olé” shouts. There followed a colourful performance, conducted with evident enjoyment and featuring nicely characterised solos from the Miller (Dan Dixon’s piccolo) and the Corregidor (the lumbering bassoon of Nick Rampley). The Miller’s wife was softly sensual in the hands of the strings, while mezzo-soprano Stephanie Lewis gave two clear and beautiful solos from the balcony, firstly from the left and secondly a stern warning from the back of the church.

Keable conducted with close attention to detail, pulling the tempo around tastefully where warranted and securing a high spirited ‘Fandango’ as the Miller’s wife danced, then a full-blooded ‘Farruca’, dragging the rhythms appropriately. The comedic plot of Part Two was revealed with no little farce, the piano adding sparkle to the top register, while the ‘Jota’ blazed colour in its louder moments.

The Second Suite from Ravel’s 1912 Diaghilev-commission was beautifully layered, though Keable favoured slow tempos throughout ‘Lever du jour’ and ‘Pantomime’. Nonetheless the dawn led to a sunrise full of warmth, and there was clarity to the texture. There was particular attention given to overall colour, and a surging ‘Danse générale’ came after a ‘Pantomime’ of languorous string pizzicatos, the warm flute solo courtesy of Mike Copperwhite.

The upper strings were taxed at times, however, and this was a more revealing case in the Britten, whose more testing passages had ensemble frayed around the edges, the tuning less secure. It was however a small price to pay for a vibrant interpretation, from a dramatic introduction through the ‘Funeral March’, with its Mahlerian anguish, to the assured closing pages. On the way an elegant ‘Romance’ charmed, the ‘Aria Italiana’ galloped along and the ‘Bourrée’ had plenty of bite. The Theme’s initial presentation caught the wistfulness of Bridge’s original (from the second of his three Idylls for String Quartet), though could have been projected further at its return.

A most rewarding concert, then – and as ever with Keable, an interesting programme.