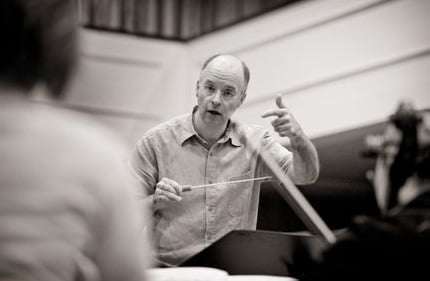 Action! Let’s get the moans out of the way first. The Queen Elizabeth Hall was like a furnace, a wall of heat that was oppressive and uncomfortable. Something to address during the imminent refurbishment, so too the high level of hiss emanating from the loudspeakers, the latter needed for some amplified instruments in part two of the concert. It needs a serious upgrade come the renovation. The hiss was most distractingly apparent during the Wagner, the least-good performance of the evening. ‘Rhine Journey’ was shorn of its essential ‘Dawn’ awakening and started with a jolt rather like an athlete pre-empting the starter’s pistol and was slightly too much on the chirpy side. The ‘Funeral March’ for our felled hero (once used for a Harpic advert!), for all the lament and glower on offer, didn’t quite go into flame-fuelled transcendence. The unexpected pizzicato that ended the sequence was very unpersuasive, flippant even.

Other than that this was an Oscar-winning concert from the Kensington Symphony Orchestra, Russell Keable doing his Alfred Hitchcock with some screenplay if without murders and intrigue. And if Wagner seems an unlikely bedfellow for a film-music concert, let’s remember ‘Ride of the Valkyries’ is used in Apocalypse Now. So what follows is all silver-screen sweetness and light; well, save for Sherlock, which is certainly a brilliant series with Benedict Cumberbatch and Martin Freeman (Doctor Watson), but this suite of music from it, sometimes noisily over-scored if conversely richly atmospheric at other moments, ultimately seemed too derivative and needing the images that it accompanies. The KSO did a riotous impression of a gypsy band though and Alan Tuckwood offered a sweet solo on his violin, Sherlock’s instrument. Basil Rathbone and Peter Cushing equal-first for me! Jeremy Brett very close. At the other end of the quality scale, in terms of relative newness, is Danny Elfman’s music for Batman, which proved sinister, translucent and fiercely heroic, a great score of shadows, chills and waltzing as villains are removed from Gotham City.

Everything else was a classic, the augmented KSO in top form, well rehearsed and enjoying every minute. The respective halves opened with exhilarating entrées. First off Miklós Rózsa’s sultry and exotic Spanish tramping for El Cid, rousing and colourful, but so Walton in the fanfares; and, later, Maurice Jarre’s percussive tattoos and skirling woodwinds prefacing the sweeping melody of Lawrence of Arabia; throw in a jaunty military march for good measure.

Continuing the timeless, captured on celluloid, nominations, Erich Wolfgang Korngold’s music for The Adventures of Robin Hood (Errol Flynn) has its memorable march, too, as well as romance and swordfights, and Keable had this music fully in his lens. I interviewed the late Elmer Bernstein about fifteen years ago – what a nice and interesting man and what a standard is his ‘main theme’ for The Magnificent Seven (led by Yul Brynner and Steve McQueen). The KSO and Keable created the great outdoors (Mexico) and also sent for a reinforcement, cowboy-hatted guitarist Declan Zapala, who strolled on, played a few bars and was then lost to the Wild West; now that’s what I call a cameo appearance!

Finally, John Williams, who invests much personality and depiction into his film music (a glittering list). From Superman the ‘Love Theme’ was given with tenderness and the ‘March’ with swagger; the KSO flew through the air with this one. There was time for an extra reel, a sky-high outing for 633 Squadron courtesy of Ron Goodwin. As I crossed the bridge to Charing Cross station a lone saxophonist was dealing passers-by Nino Rota’s Godfather theme: all the world’s a film!

Sixty next year and currently in a golden period of programming and performance, the KSO’s next concert returns it to St John’s, Smith Square on March 14 with guest-conductor Alice Farnham. Charlotte Bray’s Black Rainbow to begin with (her At the Speed of Stillness at BBC Proms 2012, Mark Elder conducting, was alone worth the price of admission), Rachmaninov’s Paganini Rhapsody with Martin James Bartlett (BBC Young Musician of the Year and already proving to be a rare talent) and Prokofiev’s delicious Seventh Symphony, thankfully in its first version. Meanwhile, as far as this film-music concert is concerned, that’s a wrap!