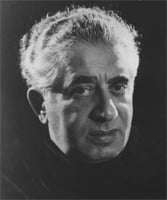 A concert high on colour, rhythm and energy, all focussed by Rafael Frühbeck de Burgos’s experience and immaculate conducting technique.

Khachaturian’s Piano Concerto (first heard in 1936) has a flavour all its own with exotic allusions to folk-music and folk-instruments. Music just as easy to enjoy as it is to deride. The concerto is no masterpiece yet can be more persuasively performed than here, the emphasis in this performance placed on forward-motion, which is understandable to paper over the music’s cracks and avoid indulgence, even if a certain grandeur – which the music does possess – was missing. Orchestrally things were well-prepared – the slow movement (marked Andante con anima) coming off best, the eerie strains of a flexatone (ably rendered by David Corkhill) setting off the oleaginous bass clarinet solo. Pianistically, there were reservations: not with Jean-Yves Thibaudet’s technique – or his razzle-dazzle (should that be a consideration) – but with a lack of colour and variegation together with brittle delivery, clattering treble and a general lack of tone. Yes, there was some delicacy and dynamic contrasts, but it was all rather limited beyond the prestidigitation. 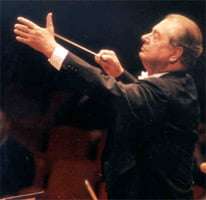 Contemporaneous with the Khachaturian is Carl Orff’s “Carmina Burana” – doing a ‘London bus’ impression at the moment (there were two performances from the London Symphony Orchestra and Richard Hickox over the weekend) – music closed associated with Frühbeck (who made a celebrated, still-available recording many years ago) and who was here conducting from memory (no mean feat in itself). Like that recording, Frühbeck’s interpretation can be less than convincing. Certainly there was keen expectation in the opening ‘O Fortuna’ chorus, the rhythms clear, the scoring relieved; and with plenty of punch, too. Elsewhere, though, some of the quicker music lacked swing and exuberance – although there were aural compensations that such deliberation invariably brings – and some of the slower ones dragged. Yet one admired the conductor’s patience with music that can seem (or be made to seem) tedious and his determination to reveal the notation of rhythms in the lustier numbers. Whether the spirit of the music was fully captured is another matter.

But it was also a very ‘complete’ performance, each setting allowed its own time, space and character; it was just that Frühbeck seemed too intent on exploring all possibilities too much and overlooking the essential simplicity (sophisticatedly achieved) of Orff’s music. Frühbeck’s discipline somewhat drained the score of vernal freshness and bawdy foot-stamping while ensuring so much was in place, not least abrupt changes of tempo that were quirky enough to be exactly what the composer wanted.

Whilst much in the orchestra was lucidly sounded (flautist Paul Edmund-Davies brought off with aplomb what might be regarded as Frühbeck’s excessive requirements for ‘melodic shaping’), the Philharmonia Chorus, for all the commitment and enthusiasm on display, couldn’t always find the required unanimity, while the boys were a little contained. Of the soloists, David Kuebler was both stratospheric and pained, and red in the face, as the roasted-alive swan, Claire Rutter floated radiant tones, and William Dazeley, while lacking a free spirit at times, managed a fine rage and physical totter as the inebriated Abbott. A similar abandon was needed elsewhere, though, but the performance as a whole was a tribute to taking Orff’s most-popular work very seriously and bringing it off with dedication. Certainly a very positive impression remains, both of the music and of Frühbeck’s skills.