In her London recital last year, Khatia Buniatishvili took quite a few risks with audience expectations and attention spans, a process she indulged even more in this Barbican Hall concert of Schubert and Liszt. 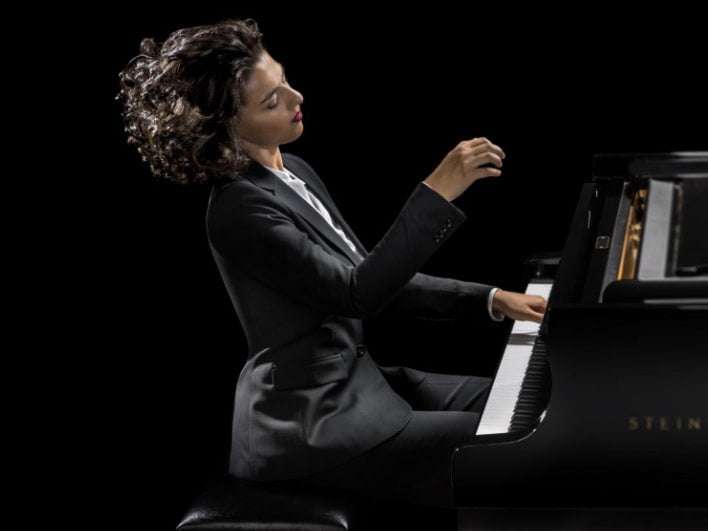 From her engaging, rather operatic stage persona onwards, though, this dazzling virtuoso also has the persuasive wherewithal to take you with her into the extremes and eccentricities of her intuition. The first half (or the first two-thirds, as it turned out) of her programme, Schubert’s B-flat Sonata, absorbed almost an hour, including a slightly delayed start (not to mention some ruinous clapping between movements), but a playing time of nigh-on fifty minutes for a work that is a stretch at, say, forty was the result of some epic inflation – yet Buniatishvili somehow almost justified it. The way she laid out the bare bones of the first movement – the opening motif, the sepulchral trill – then gradually animated them and folded them into Schubert’s plan was beautifully done, as was the hint of tension that crept into the long link back to the exposition repeat, but her reading of Molto moderato had virtually nothing to do with the underlying Allegro-ish momentum that I’ve got used to from other performers.

The varieties of timbre in her beautifully produced pianissimo were mesmerising, a quietness with a muscular core that she deploys liberally. There were enough subtleties of detail and focus to keep the movement sliding into narcolepsy, but the second movement was another matter. Marked Andante sostenuto, it normally relates to a walking pace, but Buniatishvili took it at a pace so glacially slow as to make a funeral-march seem jaunty. I exaggerate, a bit, for effect, but then so did Buniatishvili, a lot. It was an achievement of sorts that the whole thing didn’t atomise as it became becalmed often on the fringes of audibility. This Sonata invites any number of agendas, emotional and spiritual, but she lost me here. Big applause, though, and the Scherzo was a masterclass of delicate velocity, perfectly judged syncopations and clever pedalling, while in the Finale she showed off her handsome, rippling octaves and a neat sense of humour.

After the interval, it was show-time. Buniatishvili clearly has the temperament for Liszt, and in three Schubert song transcriptions, all of them corkers, she got behind Liszt’s take-over acts in a way that was intensely and unexpectedly moving, and very much to both composers’ advantages. The famous Ständchen melody tottered fragilely over the accompaniment then became almost luridly morose when transferred to the tenor line; poor Gretchen’s despair suddenly exploded into universal misery; and the drama of Erlkönig presented the unequivocal majesty of Buniatishvili’s overwhelming virtuosity, and however fff those bouncing repeated octaves became, the sound was never ugly.

Impossibly, she went on to even greater things in a stupendous performance of Mazeppa, with leaps between hands and total command of the piece’s terrible story that took your breath away, and then dived into the Sixth Hungarian Rhapsody as if possessed. What she was doing, a meeting of magnificent technique and spot-on imagination, put her wayward D960 into context, or at least made you more amenable to it.

There was an ovation, a Covent Garden-full of flowers, many kisses and flirtatious waves. She really knows how to play and play to an audience and the effect is irresistibly life-enhancing, as were her two encores, the friska from Liszt’s Hungarian Rhapsody No.2, not so subtly enhanced by Horowitz and by Buniatishvili herself, then a lowering of temperature with further Schubert, the G-flat Impromptu (D899/3).