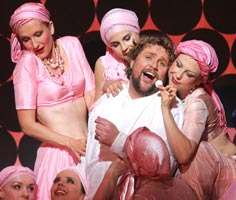 Musicals having been a recent feature of English National Opera’s schedule, so it was inevitable that a ‘pastiche’ one should enter into the equation. Described as being “Music and Lyrics by Robert Wright and George Forrest from themes of Alexander Borodin”, “Kismet” is one of numerous musicals founded on such whole-scale ‘borrowing’ that emerged in the immediate post-war era – yet, despite its runaway success on Broadway in 1953 and in London two years later, revivals have been few in number – this being the first major one in London since 1978. Could this turn out to be a case of a musical that, no matter how ingenious its wordplay and memorable its tunes, simply has little to offer today’s audiences? In fact the production, while flawed from a number of perspectives, is rarely less than entertaining.

True, the plot – distantly derived by Charles Lederer and Luther Davis from a once hugely popular play by Edward Knoblock – is pure hokum however relevantly interpreted (and there can be no more ‘loaded’ location in the world today than Baghdad), while its send-up of Muslim culture and convention, hardly aspires to meaningful satire. Yet it would be a sadly insecure society that could not enjoy the unsubtle but genuine humour in which “Kismet” abounds, and Gary Griffin taps into this with a decent production that combines the slapstick of pantomime with the theatrical focus that any full-length stage-work needs to convince – if only to justify its length. Ultz’s designs are not wholly free of Middle Eastern ‘kitsch’ and do little visually to motivate the set-pieces, but – and more importantly – they rarely impede the stage-action nor detract from the immediacy of the performances: a staging, then, that seldom galvanises proceedings but which, thanks in part to Wolfgang Göbbel’s resourceful lighting (making the dull sets at least look pretty) and energetic choreography from Javier de Frutos (who withdrew from this production on 18 June due to “creative differences”), places the musical component in a secure context. Dialogue is fluently handled.

The cast is, unsurprisingly, a mixture of popular and classical singers who, for most of the time, gel together well. Certainly there can be little faulting Michael Ball who, as the Poet, is never afraid to send-up his role as the moment dictates, yet exudes a dynamism and style that explain his eminence among current British singers. No-one today could approach the aristocratic manner of Alfred Drake (from the original Broadway cast), but in terms of substance and a ready wit, Ball makes the part his own – bringing the right ardour to ‘Fate’, a telling agility to ‘Gesticulate’ and an appealing languor to ‘The Olive Tree’ (where the Wright/ Forrest manipulation is at its most ingenious). Above all, he makes a not always admirable character sympathetic – for all that certain sections of the audience clearly did not need such an incentive. 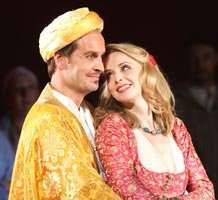 Among the secondary roles, the highlight must be the Marsinah of Sarah Tynan – her singing a model of how to adapt a ‘trained’ voice to the different if not necessarily less demanding – requirements of musical. Synchronising unerringly with Ball in ‘Rhymes Have I’, she holds the stage with her alluring rendition of ‘Baubles, Bangles and Beads’. In the two duets, too, she gives of her best: which cannot, however, be said of the Caliph from Alfie Boe – whose over-modulated tone soups up ‘Stranger in Paradise’ and ‘This Is My Beloved’, while his dialogue could not be more stilted were he reading from an auto-cue. In ‘Night of My Nights’ he gives some notice of the expressive ease that has made him this year’s Classical pin-up.

In this respect, Boe might profitably learn from Graeme Danby, whose operetta experience is tellingly deployed in a charismatic portrayal of the Wazir. Unashamedly the part that everyone loves to hate, Danby underlines the put-upon quality that makes him more than another villain – bringing real suavity to ‘Was I Wazir?’ and summoning a hint of regret at his timely demise. As his ‘wife of wives’ Lalume, Faith Prince is no less inside the role – raunchy and alluring by turns in ‘Not Since Nineveh’ and with a wonderfully deadpan sexuality in ‘Bored’. This is classy musical singing-and-acting by any standards. 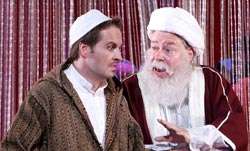 Elsewhere, Rodney Clarke is darkly but warmly ominous as the Chief of Police, which qualities inform his ‘Rahadlakum’ number, while Julian Curry is a distinguished, even honourable master-brigand. Donald Maxwell brings his theatrical experience to bear on the small but vital role of Omar Khayyam, whose eloquence in ‘Sands of Time’ launch the evening in fine fashion, and whose world-weariness is neatly put across when he and the Poet meet during Act Two, before a finale that provides a fitting framework with its transformed recollection of time and place: an eloquent ‘squaring of the circle’.

No surtitles in this production, but enunciation in both song and speech lacks little in clarity – though the regrettable amplifying of voices does serve to place them at an acoustic remove from the orchestra. The latter, together with the ENO Chorus, gives a fine account of itself throughout the evening – relishing the ‘swoon’ of those Borodin melodies and evincing Bernstein-like rhythmic drive in the rather absurd ‘Zubbediya’ (which the players made rather more of than did the overworked dancers on stage). Richard Hickox brings his customary expertise to the performance, keeping the show moving at all times while not forgoing an opportunity to linger (never unduly) on the various expressive highpoints.

Overall, then, a worthwhile revival of a show that is easy to dismiss but hard not to profess at least a sneaking enjoyment for. Take the narrative (and a fair degree of the production) with a pinch of salt, and let the music and (most of) the performances work their alluring spell – it really is that simple.