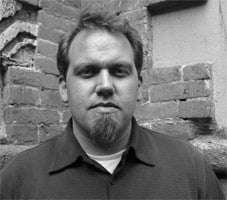 In Stockhausen’s Himmels-Tür, the percussionist/protagonist is literally ‘knocking at the door’ – in this instance, Heaven’s door. The notion of someone striking blows at a metaphorical portal for the best part of half-an-hour may not sound terribly enticing, but in point of fact, the variety of sounds that Stuart Gerber elicited, allied to his eloquent movements, was actually quite fascinating.

As with much of Stockhausen’s work – his later pieces in particular – one needs to see the performance, not just have an aural experience via a CD or broadcast. I must confess to having found listening to a disc (Stockhausen-Verlag 86) somewhat hard going; no doubt I shall now appreciate it the more for having seen the piece live.

Himmels-Tür finds a percussionist coming to a door made from wooden panelling of various kinds – there are six panels on each side, each producing different qualities of timbre. With a bewildering array of strokes and other modes of attack, the performer gradually increases the intensity of his attempts to force the door open. He also often deploys foot-stamping with heavy, nailed shoes – sometimes these are in direct response to the rhythms hammered out on the door. In any event, what sounds rather unpromising as a bald description turns out to be absorbing as a musico-dramatic performance. 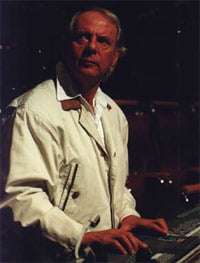 At the climax of the hammering, the door suddenly springs open (a moment enhanced in this presentation by evocative lighting); the percussionist goes through the door to seeming nothingness. Suddenly an aggressive onslaught of metal percussion – cymbals, hi-hats and tam-tams, all of differing sizes – breaks out, soon to be joined by the disturbing sound of a wailing siren. A little girl walks from the audience, peers round the door, enters and, one assumes as a consequence of her presence, the racket is gradually quelled.

I’m sure the scenario – and sounds – are all heavily symbolic; they certainly make one think as to possible or potential meanings. Stockhausen wrote Himmels-Tür for Stuart Gerber who gave a thoroughly convincing performance.

There then followed a projection of Tür-Rin, an electronic-based piece with a punning title in the German – in English, door and rin (Japanese temple cups). An electronic background is punctuated by the sound of the door (from Himmels-Tür) being struck in unison with the rin being played. There are 24 of these, being the pitches deployed throughout the “KLANG cycle” – although Tür-Rin does not appear to be an integral part of it.

In between the sounds of door and rin, a voice is heard declaiming what the composer describes as “noble words” – “worship, joy, friendship” to start, “balance calm, beatitude” to conclude. It was moving to hear Stockhausen’s own voice declaiming these words in his characteristically accented English (there is also a version with the words in German). In a programme note (not reproduced in that issued by the Southbank Centre), Stockhausen indicated that “the noble words should actually keep Himmels-Tür open”.