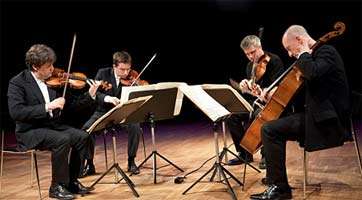 David Matthews’s catalogue includes seven symphonies, twelve string quartets and numerous concertos. This concert premiered his String Quartet No.12 with its self-proclaimed acknowledgement to Beethoven’s Opus 130 including the original finale, Grosse Fuge (published as Opus 133), music of such extreme musical outline that the ‘tradition’ of the string quartet was changed forever. Matthews’s Twelfth String Quartet lasts some forty-three minutes and in seven movements, three linked by cadenzas. It begins rather than ends with a fugue and contains birdsong from England and Australia. Of the seven movements, four were pre-composed, rearranged and inserted into this unusual structure. The big opening fugue is followed by a tango, which is followed by a Minuet.

David Matthews wrote this work without a commission no doubt due to compulsive compositional impulses for the Kreutzer Quartet. Indeed it is doubtful whether any commission would have allowed such an expansive view of the modern string quartet. The Kreutzer members are long-standing champions of Matthews’s quartets and are recording them; these players seem to thrive on challenges and have one of the most adventurous repertoire-lists in the business. Matthews, with his new monster quartet, certainly stretches not only the stamina of the players but also the imagination of the audience. At this premiere both were triumphantly met.

The overall feeling after the premiere was that Matthews is the natural successor to Robert Simpson in devoting his energies to the medium of the string quartet. Simpson wrote fifteen. He, too, tackled head-on the preconceived ideas of the traditional shape of a string quartet as a form. Matthews has gone a stage further in his ongoing cycle as embodied with this Twelfth. Whereas Simpson stuck to his fierce adherence in acknowledging models, particularly Haydn and Beethoven, Matthews seemingly embraces the world in the Mahlerian sense, with so many disparate idioms at work.

The ten-minute opening movement opens with a consonant, almost hymn-like melody before the music hurtles into a fugue with demonic energy. Part-way through, English birdsong inserts itself into our hearing forming a contrast to fugal bedlam. There follows, almost perversely, a tango, a favourite dance-form of the composer’s, appearing as it does in earlier works, including the Fourth Symphony. This tango was rearranged from the Piano Concerto. After a virtuosic violin cadenza, the first Minuet appears. It originates from a Haydn piano sonata and was originally written as a tribute to John McCabe on his 70th-birthday. A cello cadenza, solemn and grave, gives way to a delightful, urbane Serenade with English birdsong refrains breaking into the civility of the melodic structure. The third cadenza, for the second violin and the viola, leads to the heart of the quartet, an entirely original piece. Melody again predominates but more condensed than before. The texture is in the rich English tradition. It as if the composer is seeking to emulate the natural lines we hear in the birdsong quotations with a deeply considered approach to a discussion between the four players, quest for peace and tranquillity. The second Minuet, written for Peter Sculthorpe’s 80th-birthday, takes the listener effortlessly towards the finale, mostly fast, displaying a positive attitude to the rights as opposed to the wrongs in the world. Australian birdsong at the end merely confirms the overall beauty of the long coda to a spacious but not overlong work.

The Kreutzer Quartet opened the recital with Matthews’s tribute to Beethoven, an arrangement of a piano bagatelle. Webern’s Six Bagatelles was a logical and neat follow-on. Webern is a strangely neglected composer. Surely gone are the days when his music caused bewilderment and controversy. These little jewels, the set lasting under three minutes, are like ghosts in shade, fluttering apparitions on our imagination. The Kreutzer musicians bought flair and commitment to demonstrating the power of suggestion in these marvellous miniatures.

Nothing further from this ideology could be imagined in Elgar’s Piano Quintet. Gone is Edwardian swagger; doubts have entered Elgar’s mind. The tentative opening is a prelude to a restrained but occasionally passionate chamber work. Two contemporaries spring to mind: Sergei Taneyev and Gabriel Fauré. All three adopted in their music a late Romantic glow, embers in a fire long past its fierce height. When Elgar wrote his Piano Quintet Stravinsky was sketching “Les noces”. But we can still enjoy late Elgar, who remains as personal as ever in this Quintet. David Owen Norris and the Kreutzer Quartet played in keeping with the music’s autumnal sounds with careful attention to dynamics and rising to impassioned heights when required. The Kreutzer Quartet is resident at Wilton’s Music Hall. With no apparent intention of turning this historic building into a glittering showpiece (thank goodness) this centre of wide-ranging entertainment deserves to be better known. The Kreutzer Quartet is building a reputation here and the capacity audience was testimony to the musicians desire to please and challenge.