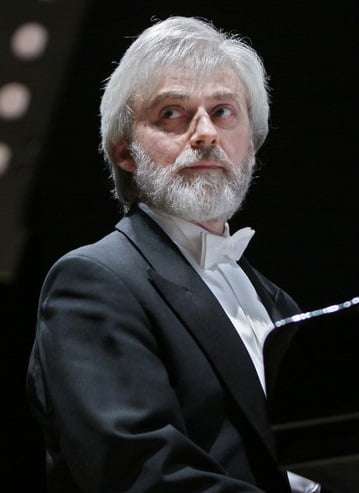 With Mitsuko Uchida indisposed, the Southbank Centre pulled off a coup by enlisting Krystian Zimerman in her stead for the latest chapter in its International Piano Series. Schubert was common to both recitals, Uchida also down to play Berg, Mozart and Schumann, whereas Zimerman included him substantially, his final two Piano Sonatas, spiced by Szymanowski.

Maybe Schubert is not the first composer to be associated with the exclusive Zimerman (he rations his appearances), although he recorded the two sets of Impromptus some time ago for DG, and this Sonata pairing is his current programme; he played it in Berlin last November, for example, and has recently been in Italy.

D959, launched into the dying embers of welcoming applause, opened with an energised first movement, which, in the second subject, yielded to shapely lyricism. There was no doubting that the Steinway (Zimerman’s own instrument) was especially lovely-sounding across the range: pearly in the treble and lucid in the bass. In music that can be made to seem heavyweight and histrionic, Zimerman found a convincing joie de vivre, and a clarity worthy of Mozart, but there was no lack of Beethovenian muscle either, nor searching and solace, and the arpeggios at the movement’s close were magically soft.

The Andantino was slow of tread and as intimate as you can get in a large space, until the explosive and gnarled middle section, quite jagged here. The Scherzo received a mercurial rendition, and the Trio was as intangible as ever, although I was hanging on every note, while the expansive Finale, amiable and a quicker walk than is sometimes the case, became more demonstrative as required, and was assured of a fully rounded homecoming. This was a revelatory reading, and, if for different reasons, on a par with Sokolov in April 2005 (Queen Elizabeth Hall).

To open the second half were four of Karol Szymanowski’s mid-1920s Mazurkas (numbers 13-16). Each was appealing, whether elusive and with deep-rooted pathos, overt, dreamy or propulsive and strongly rhythmical. Zimerman’s identification with his home-country’s dance (immortalised by Chopin) was total and it is difficult to imagine these pieces being more persuasively shared.

If Zimerman’s tempo for the opening movement of D960 was on the brisk side for Molto moderato, such a forward-moving approach was neither rushed nor inflexible; indeed there was some well-timed easing, and it was so expressive. As in D959 Zimerman observed the exposition repeat. In the B-flat Sonata the lead-back bars may be thought perfunctory but it is the only place that the ominous bass trill is heard fortissimo, and it certainly growled from Zimerman. Maybe it was an illusion, but I thought that second-time-through Zimerman was a hairsbreadth slower, and slower again when the recapitulation was reached. Throughout the first movement Zimerman avoided sentimentality yet conjured mysticism, an understated alchemy was at work, enough to suggest that Schubert was at the Edge of the World.

Solitariness was exposed in the second movement, properly spacious, with a suggestion of hope at its mid-point, to which the light-as-thistledown Scherzo was an admirable foil, the cross-hatching Trio indivisible to it. With the Finale, Zimerman (his instrument now attracting a buzz at a few points) found a happy-go-lucky streak to the music, cheeky even, yet never glib, for it was stern, too, and laden with intent. Of course this Sonata is virtually the 31-year-old Schubert’s ultimate music, and before the emphatic coda, forcefully delivered, Zimerman had lingered in bittersweet terms.

He was generous with three encores, each soulful and emotionally climactic, a triptych from Szymanowski’s Nine Opus 1 Preludes. Before playing the third of his choices Zimerman said “I promise this will be the last!”. Maybe for now, but hopefully not forever, for these miniatures were hallmarked by a master. Indeed, in wholeness this was a great concert, Zimerman’s profound musicianship – whether taking the notes on a journey, or delighting the ear with dynamic variance, subtle shading and a range of touch – created a very special occasion, one full of compelling illumination.

It will be interesting to now hear Richard Goode perform these Schubert Sonatas, plus D958, at this address on May 25.