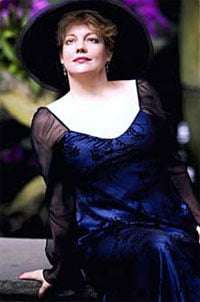 Pizza on the Park was London’s only constant cabaret room for about thirty years. Last year it closed to make way for a hotel but its good work has now been transferred to Chelsea’s The Pheasantry, a Pizza Express establishment on the King’s Road that has a basement area well suited to the type of intimate cabaret that was the hallmark of Pizza on the Park in its Knightsbridge heyday. Cabaret in London was dead – long live cabaret in London!

This New Year at this new venue starts-off with a bang and the return of the delightful KT Sullivan, who was last in London in 2009, giving her tribute to the songs of Jerome Kern. Her newest compilation, “Coloured Lights”, draws on her experience in such musical-theatre pieces as “Gentlemen Prefer Blondes”, “Annie Get Your Gun” and “The Threepenny Opera” (with Sting). An Irish-American, Sullivan has played all the famous New York cabaret venues such as the Oak Room at the Algonquin Hotel, Carnegie Hall, Café Sabarsky and Lincoln Center, as well as the Kennedy Center in Washington DC, and Chicago and San Francisco, and has performed in the UK, France and Italy.

Vocally Sullivan has a semi-operatic, high-lying soprano that brings depth to any song. Her latest album “Timeless Tunes” has her singing ‘Vilia’ from Lehar’s “The Merry Widow” as well as ‘Ol’ Man River’ from “Show Boat”. Her versatility knows no bounds, and she can have one in tears one minute and howling with laughter the next.

The choice of material runs the gamut of The Great American Songbook with a vengeance, covering Rodgers & Hart, Jule Styne, Stephen Sondheim, Irving Berlin, Jerome Kern, Cole Porter, Lerner & Loewe, Jerry Herman and Vernon Duke, as well as the more-contemporary songs of Amanda McBroom, Adam Guettel, Kander & Ebb, and Scott Frankel & Michael Korie. The mistress of the musical medley KT (Katie) Sullivan glides seamlessly from one song to another; sometimes with some theatrical stories abut being directed by the centenarian George Abbott or playing the second understudy for Polly Peachum in “The Threepenny Opera”.

The lady opens her Chelsea set with ‘Try to Remember’, from the world’s longest-running musical “The Fantasticks”, which opened off-Broadway in 1960 and ran for forty-two years (a revival in 2006 sees it still running to this day). Last year’s UK revival proved fatal: good music but not a show that appeals to us in London. Next up comes Richard Rodgers’s music for ‘Do I Hear a Waltz?’ from the show of the same name, with lyrics by Sondheim and a leading part that would suit Sullivan down to the ground if it were ever to be revived. This segues into the ‘Baby June’ number from “Gypsy” from Sondheim and Jule Styne before she does a classic Rodgers & Hart tune in the shape of ‘Falling in Love With Love’ from “The Boys from Syracuse”. After Polly Peachum comes ‘A Little Girl from Little Rock’ which she sang in “Gentlemen Prefer Blondes” (by Styne and Leo Robin).

Pausing to quote from Diana Rigg’s book “No Turn Unstoned”, a collection of quotations from bad reviews of shows (“the play started at 8 p.m. sharp and finished at 10.30 dull”) Sullivan accompanies her readings with Irving Berlin’s ‘Well, Of All the Rotten Shows’, a song about bad shows from “Face the Music” (1932).

The complete set runs to about ninety minutes without an interval and Sullivan keeps up the pace with enormous vitality. She is aided in this by the brilliance of Jon Weber’s excellent piano-playing which adds a deal of syncopation to many of the songs. There’s a honky-tonk feel to the show which is totally winning and Weber’s playing coupled with Sullivan’s personality and thrilling, trilling voice, lends the proceedings a decidedly old-fashioned air.

The evening is full of delights that include Cole Porter’s ‘The Tale of the Oyster’, ‘Another Autumn’ from Lerner & Loewe’s “Paint Your Wagon”, ‘Who’s That Woman?’ From Sondheim’s “Follies” and a cute Noël Coward medley of ‘World Weary’ and ‘(I’m So) Weary of It All’, both made famous by Bea Lillie. Vernon Duke’s ‘Autumn in New York’ gets an evocative treatment, as does Amanda McBroom’s ‘Dreaming’. Then it’s back to show-biz: ‘But Alive’ from Charles Strouse and Lee Adams’s show “Applause”, ‘Another Op’nin’, Another Show’, from Cole Porter’s “Kiss Me, Kate”, and Irving Berlin’s ‘There’s No Business Like Show Business’ from “Annie Get Your Gun” – rousing stuff. After the Jerome Kern/Irene Franklin comedy song ‘My Husband’s First Wife’, comes the song that gives Sullivan’s show its title: ‘Coloured Lights’ from “The Rink” by Kander & Ebb.

But that’s not all, for Sullivan admits that her favourite year for songs was 1929, and she proceeds to deliver twenty-nine of them including ‘Keep Your Sunny Side Up’, ‘Am I Blue?’, ‘Puttin’ on the Ritz’, ‘Tiptoe Though the Tulips’, ‘You Do Something to Me’, ‘Ain’t Misbehavin’’, ‘Happy Days Are Here Again’, ‘More Than You Know’, ‘Without a Song’, ‘Roll Out the Barrel’, ‘Singin’ in the Rain’, ‘You Were Meant for Me’ – the list goes ever on – but KT proves she has staying power. You’d be crazy to miss her evening at The Pheasantry because that’s pure entertainment, that is.