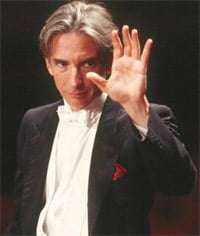 This exciting account of Mahler’s Sixth ymphony, played to an almost capacity house, was preceded by a pre-advertised talk by the conductor. This had its amusing moments. Tilson Thomas’s comic description of his very young self encountering an elderly Alma Mahler in a bookshop owned by his godfather is certainly a good yarn, and was told here with theatrical flair and perfect comic timing. However, the actual description of the work and its thematic material almost played second fiddle to this episode, and was at best rather straightforward and superficial. There was much comment about the origins of the work and how Mahler viewed it, but very little insight.

However, the performance was an excellent one. The Royal Philharmonic of Stockholm responded thrillingly to its extrovert conductor, wringing as much of the emotion and dialectic from the work as one could absorb. The martial march episodes that occur in the first and final movements had a metallic, glittery swagger and propulsion about them that contrasted with the more lush, lyrical episodes. The many pseudo-climaxes of this first movement were all finely judged, and the pastoral interlude with its distant cowbells (shaken outside the hall doors), was sonically perfect.

In his talk, Tilson Thomas mentioned the debate about the ordering of the middle movements. He preferred to play the scherzo second and the Andante moderato movement as the third – as was the ordering of the first published edition. In the work’s premiere conducted by the composer, they were played in the reverse order. It would have been interesting if Tilson Thomas had elaborated on this aspect of his interpretation and outlined his reasons in depth. Of course, in this ordering the scherzo almost becomes a continuation of or a direct response to the arguments of the first, and allows a gradual build up of intensity through the quieter Andante moderato to the dramatic finale. In the Scherzo the woodwinds were thrilling in their ominous trilling, the brass suitably raucous in their responses. The trio sections provided welcome relief, with the woodwind both piquant and sweet, the strings nicely rustic.

The restful Andante showed off the orchestra’s strings to great lyrical advantage, and here mention should be made of Joakim Svenheden’s solos. London audiences may remember him as a Leader of the LPO. The velvety lower woodwind and fulsome horns were warm and responsive too.

In the finale, Tilson Thomas drove his forces to greater extremes of dynamic, the utter relentlessness of fate and the futility of human existence to succeed against natural forces vividly enacted. The damning hammer blows made the shocking impact they should, although it was a slight pity the percussionist had to cross the rear stage rather visibly to wield the weapon each time.

The performance was given an ecstatic reception, crowned by an orchestral “touch” – a sort of chordal orchestral fanfare of approval – which was granted to the conductor as he made his bow. This was a fun moment that drove up the emotional temperature in the hall even further.