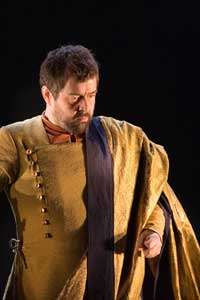 This was English National Opera’s first revival of its very successful Olivier Award-nominated production of Mozart’s final opera, which was written for the coronation of Emperor Leopold II. First to say that Yannis Thavoris’s designs and sets remain very handsome with their various grilles and curved walls that throw darkness and shadows and a sense of claustrophobia so heightening the political intrigues of the plot. If some of the McVicar visual hallmarks such as the stylised movements of Tito’s bodyguard are now rather familiar they still have a freshness of execution demonstrating care over the revival. As for characterisation of the principals, which completely carry the narrative, there were some strong performances by newcomers and refinements of interpretation by members of the original cast – more anon. The chorus, invisible, sang from the upper balconies of the theatre.

As the overture began the orchestral sound seemed rather bass-heavy with some of the lower-voiced instruments rather drowning some of the upper string figures and woodwind detail, and the bassoon seeming strangely prominent. After the crisp interpretations that Harnoncourt, Mackerras and René Jacobs, et al the overall textures favoured by Edward Gardner seemed rather weightier and romanticised than one now expects, although one could argue perhaps that the denser textures perhaps suit the production well. However, the playing of the instrumental soloists was of high quality – mention of course to be made of the marvellous obbligato clarinet and basset-horn playing in the big arias of Vitellia and Sesto. Tempos were on the whole sprightly and what also remained from last time was the generally speedy delivery of the recitatives. Since these are not by Mozart but by Süssmayr and generally accepted as the ‘weakness’ of the score this is probably all to the good. Certainly handling them in this way added to the dramatic presentation. 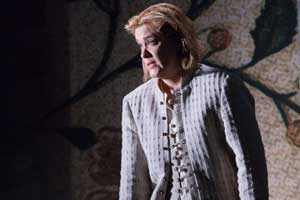 Before curtain-up an announcement was made that Alice Coote, new to the production as Sesto, had been suffering from a rather intractable chest infection, but that she had agreed to sing. A slight tentativeness and vocal restraint perhaps indicated the only evidence of any problems early on. By the time ‘Parto, parto’ was reached Coote was on marvellous form – her rich resonant voice, impassioned delivery and intense stage-presence portraying the opera’s most complex character in vivid detail. Her remorse for attacking Tito and the start of the Act One finale was incredibly moving.

Emma Bell returned to the production as the manipulative, power-hungry and vengeful Vitellia. She won many plaudits when the production was new for her committed and exhilarating vocalism and her fiery, almost feral, interpretation of the part. Reprising the part Bell gave a superior interpretation to before. The vocalism was as assured as ever in this wide-ranging role – whether hurling out top Ds in the Act One trio or plumbing the depths in an intense ‘Non più di fiori’, but the interpretation was rather more complex, benefiting from an unsettling stillness at times contrasted with the fieriness of before. She is one of those singers one watches even when she isn’t singing!

Returning as Tito Paul Nilon gave an assured performance as the ruler of Rome. It’s not the most grateful of roles from a singing point of view but Nilon made the most of his opportunities and, as always, gave a thoroughly sensitive and musical performance. It should be said that the diction of all the principles was outstanding – allowing every word of Amanda Holden’s translation to be heard and rendering the surtitles absolutely superfluous.

In the rather more minor roles Anne Marie Gibbons gave an assured performance as a concerned and faithful Annio, even if she seemed slightly tense at the top of the stave in her short Act Two aria. Andrew Foster-Williams managed to make much of little as Tito’s henchman Publio. Sadly, Sarah-Jane Davies gave an oddly bland performance of Servilia, Sesto’s forthright sister. Vocally it was decently sung but dramatically her contributions all seemed rather uninvolved, especially when compared with the performances of Bell and Coote. She did not seem to catch Servilia’s forthright honesty that informs Tito that she actually loves Annio, and did not evince overwhelming concern at her brother’s forthcoming execution.

The production remains hugely enjoyable, one of ENO’s most successful forays into Mozart, and this revival of “La clemenza di Tito” is deserving of more than the four further performances in this run.