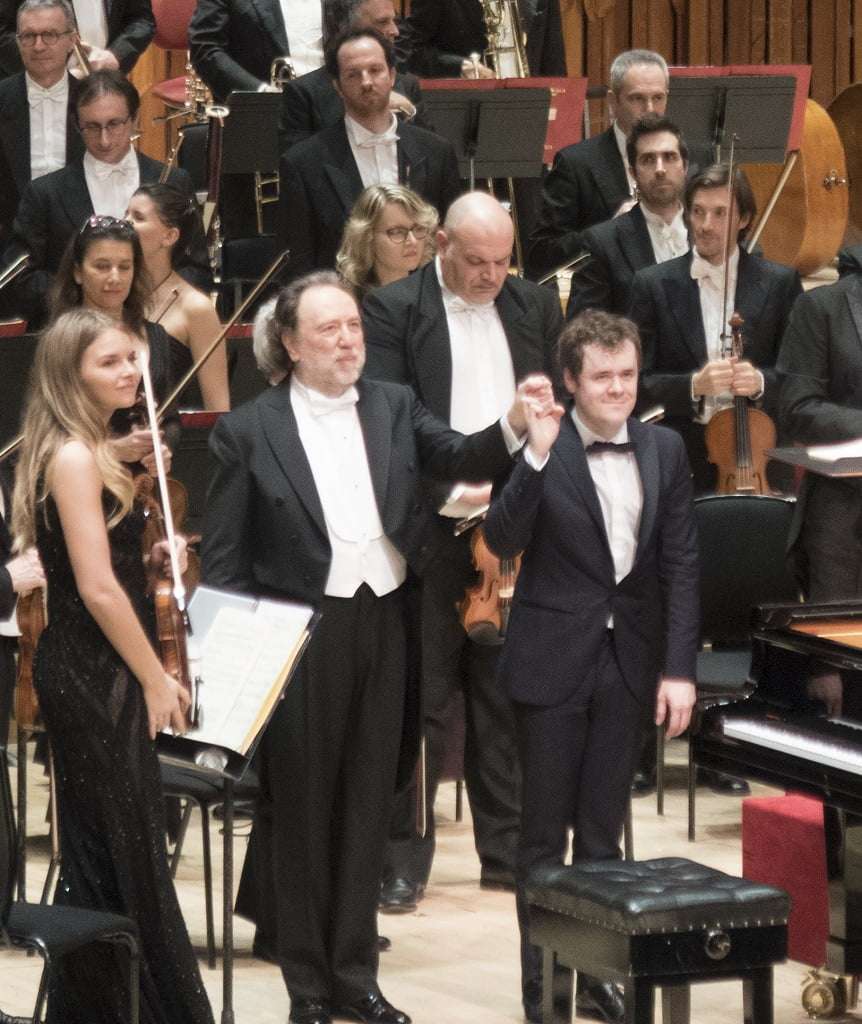 Our Classical Source editor would have been very pleased, for we got a second Overture as a generous encore; indeed one that returned a second side-drum player to the stage. So to counterbalance the antiphonal side drums that rat-a-tat at the opening of Rossini’s The Thieving Magpie, we had the more dangerously sinister militaristic tattoos in Verdi’s The Sicilian Vespers, both thrilling in execution as one might expect with an ensemble of such operatic credentials as La Scala Philharmonic. These Overtures showed the Italian players off at their best: with a thrilling sense of balance and timing, characterful woodwind and cracking brass (the tuba player swapping to a cimbasso, valved bass trombone, for the Verdi following the Tchaikovsky).

That’s not to say the centrepieces of the programme were not enjoyable. Paired with Benjamin Grosvenor in Grieg’s Piano Concerto (the programme note pointed out that Grieg wrote it when twenty-five, the age Grosvenor is now), Riccardo Chailly found an Italianate warmth in the Norwegians melodies; Puccini came to mind on more than one occasion as Chailly coaxed sun-drenched sonorities particularly from the violins. The Grieg had been a change of programme (announced long ago) from Liszt No.2, where the Italian connection would have been closer, given Liszt’s final phase partly based in Rome.

Grosvenor certainly has the power for Grieg’s thunderous descents, but also has a delicate touch which he brought to the fore in his Grieg encore – ‘Erotik’ from the third book of Lyric Pieces, Opus 43. If the title is surprising, given the music’s tender tread, it is translated as nothing steamier than Love Song – and Grosvenor coloured it intimately.

Following the interval, Chailly conducted an urgent but perhaps strangely anodyne performance of Tchaikovsky’s fateful Fourth Symphony. The brass fanfare to open was dramatic, the strings suitably surging (nine double basses), but I found none of it spine-tingling, as I often have. The middle movements fared best: the oboist’s exquisite solo at the opening of the Andantino (even though later, Chailly busy with the violins, the wind interjections were distant and abandoned) and the pizzicatos of the third movement, which eventually met with the woodwind then brass rejoinder. The Finale was fast, bordering on breathless, and although skilfully played, it left me rather unmoved. Rossini and Verdi won the day, by a long stretch.

At the start of a European tour, the orchestra heads to Budapest (25th), then on to Paris, Luxembourg and Vienna. This concert was slated to be recorded for broadcast on BBC Radio 3 – and the programme said as much. I have to report that no microphones were in evidence.