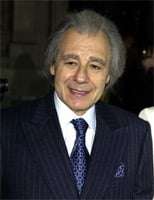 Lalo Schifrin, best known for composing killer soundtracks, such as “Bullitt”, “Enter the Dragon” and the “Dirty Harry” films, performed a selection of music from his Jazz meets the Symphony collection. The quartet of Schifrin, Pierre Boussaguet, Alex Acuna and James Morrison provided the Jazz and the London Symphony orchestra supplied the Symphony.

The ageing Argentinean composer shuffled slowly on looking a bit unsteady. Sitting at the piano, he conducts the orchestra through the opening bars of his 1999 work Chano, dedicated to master Cuban percussionist Chano Pozo. It’s a powerful opener based on a mellow piano motif. Even though Schifrin drops his score and wobbles slightly when moving to and from the piano, this is going to be no Mission Impossible for the grand old man of the soundtrack. Comfortable in jazz and classical, Schifrin is a master of the melting pot. Arrangements like Chano and the Paul Porter composition, Begin the Beguine, display the wide blend of musical elements that characterise the 76-year-old musician’s lush arrangements.

Begin the Beguine starts with a bass line of suitably cinematic proportions. Close your eyes and you are instantly transported to the savannah with the sun in your face. There are some excellent chordal changes before the music breaks to a freewheeling solo in which James Morrison dishes up some masterful trumpet work over Boussaguet’s walking bass lines.

Lalo Schifrin informs us that he will be playing some of his film music. Be warned, we could be in for a long evening. With over 100 scores to his name, Schifrin’s output is enough to fill an aircraft hangar. Boussaguet swaps his upright bass for a Fender Jazz and the composer conducts the orchestra through the Dirty Harry Suite, a thumping soundtrack from 1971. During this number the LSO’s percussionists are getting conga fever as we slip back in time and back undercover with a truly magnum force, a scorching blend of funky madness. It features some of Schifrin’s best 70s’ work, full of swooping string passages and driving percussion.

Next up, Gil Evans’s classic, La Nevada. It’s a superb arrangement by Schifrin and ingrained into the man’s bones. Out of the Cool was the record that Schifrin admits he literally wore out from continual listening – he had to buy three copies of it. The piece begins with Morrison on flugelhorn and achieves an atmospheric sustain that fills the auditorium when combined with orchestral strings.

The first set closed with Peanut Vendor. It’s a familiar number for the quartet and an opportunity to really open up. The rhythm section unleashed a monster funky Latin groove with real drama provided by the orchestra’s brass section, Boussaguet takes us on a shimmering bass solo and former Weather Report drummer Alex Acuna shows us why he’s one of the most accomplished players around, with an Afro-Cuban drumming masterclass.

The second set opens with the soundtrack to the 1968 movie, The Fox. Also performed is Bruce Lee’s first Hollywood movie, Enter the Dragon. The LSO percussionists warm up the gongs and the brass section has to work overtime for a turbo-charged affair. Once again, Boussaguet on electric bass drove the kung fu beast bass-line along. Combined with Acuna’s fizzy drumming, the music propelled forward to a massive climax that perfectly captured the drama and tension of a martial arts film.

The highlight of the second set was Schifrin’s original composition, Around the Day in Eighty Worlds. Built from a hypnotic motif that sucks you in like an Afro-Cuban Dyson hoover, this mesmerising piece is formed from Morrison’s flugelhorn floating amongst atmospheric string swells. The arrangement starts from almost nothing and slowly adds colour and airy chords that take you on a journey through time and space. The set closed with Dizzy Gillespie Fireworks. Schifrin introduces it with reminiscences of his three-year tenure with Dizzy and the influence the great founder of bebop had on him. Describing Gillespie as having a “great sense of fun but very strict when it came to his music” it’s a fitting insight into the music of Jazz meets the Symphony – lots of improvisational freedom and humour but with super-disciplined orchestral passages.

Fireworks is a medley of Gillespie tunes centred on Night in Tunisia. It’s a belter of a tune and Morrison reached dizzying Dizzie-like heights, playing both the trumpet and trombone in a call and answer routine with himself. The piece ended on a volcano eruption of orchestral lava and the audience is immediately on their feet.

As the standing ovation subsides, Schifrin is back to perform Mission Impossible, the famous three piano notes revolve over a full symphony orchestra running on 5/4 time. The arrangement comes to life and Schifrin cheekily adds in Dave Brubeck’s Take Five melody. The ageing composer dutifully complies to shouts of “more” but admits that he didn’t send any more music for the orchestra. So it’s time for Morrison to rolls up his sleeves and pop out the opening lines of Blues for the Millennium. It’s a swaggering twelve bars that has the members of the quartet jamming away like they’re at an after-hours session in a smoky New York nightclub and ends with Acuna playing a drum solo without his sticks and Schifrin looking rejuvenated.