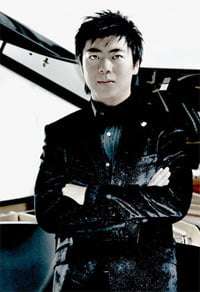 The current phenomenon, the 25-year-old Chinese pianist Lang Lang, can certainly play the piano – as he comprehensively demonstrated in this recital – but then so could Liberace, whose platform manner was systematically recalled by our young virtuoso, in his dress – a sequin-trimmed jacket, giving him an appearance not unlike that of a bell-boy in a top class Shanghai hotel – in telling the audience through a microphone what he was going to play (information that could just as easily have been imparted through the programme-book), and in his flamboyant keyboard style, which tended to detract the audience’s attention from whatever shortcomings may have existed in the intellectual side of the pianist’s re-creative abilities. But whereas Liberace, who was one of the last pupils of Paderewski, at least had a modicum of sense in selecting only music with which he felt totally at ease, Lang Lang’s youthful impetuosity, prompted perhaps by what appears to be world-wide acclamation for his gifts, has led him to perform music for which, on the basis of this recital, he is not yet fully prepared.

Thus, the great Mozart Sonata was treated as little more than a vehicle for display, not so much in technical prestidigitation (although there was certainly enough of that) as in Lang Lang choosing to encourage applause after the first movement (which the less musical members of the approximately 3,000 audience felt obliged to offer, in response to the pianist’s unwarranted lengthy pause following the last notes of that movement) and on the other by so dramatically altering the nature of the music’s dynamic contrasts as to cause us to think perhaps that the music was going on at several levels at once; in other words, one received the distinct impression that Lang Lang felt that Mozart had written the music for him, to do with as he wished. One should not be surprised, therefore, to learn that the underlying structure of this work tended to suffer from being pulled this way and at the pianist’s whim.

If such an approach were bad enough, worse – far worse – was to come in Schumann’s wonderful C major Fantasy, which lasted fully 35 minutes. One mentions the overall time (extended by more applause mid-way) so that those who know and love this masterpiece will be aware that this was no ordinary interpretation. Indeed, it was so out of the ordinary that one hopes never to hear anything like it again. In structural terms (for by now the pianist’s major weakness was becoming more evident), it was an affront to musical decency to make the final movement last virtually 15 minutes, reducing the music’s ground-plan to incoherence through a totally cavalier way with tempos, but – perhaps more importantly – by the manifold clutches of wrong notes and additions to Schumann’s text, at times reducing the work to a kind of manifestation of manic-depression. Wrong notes can afflict any player, of course, but if Lang Lang had bothered to look more at the keyboard and gaze less at the space surrounding him as his hands reached the keys we probably would have had less of them, but his additions to Schumann’s text were a further serious affront. Lang Lang is clearly no scholar, for no genuine student of Schumann would have added the lower octaves, time and again, to the left-hand part of this music – as he did – for such notes were not available to the composer on any of his pianos. Music of this nature – like scripture – is meant to be studied and taken seriously, but no-one (least of all the musically illiterate) should have been fooled into thinking they were hearing a great (still less an acceptable) performance of this work; in a word, Lang Lang’s account was a travesty.

Thankfully, the second half was better – at least in artistic achievement. It began with Lang Lang telling us about the six pieces of traditional Chinese music he had arranged for solo piano, which he then proceeded to play. These delightful Impressionistic miniatures were most beautifully conveyed, and at last one felt that the pianist was in his element. The first section of Goyescas found Lang Lang refining his keyboard coloration but at the ultimate expense of the taut rhythmic incisiveness that the Iberian tradition demands; this music presents such a difficult balancing act for those not fully familiar with, or ethnically a part of, its inherent nature, that being able to play the notes forms only a portion of its realisation.

Finally, two works by Liszt found Lang Lang extracting every last ounce of passion from Isolde’s Liebestod and bringing the house down (as the saying has it) with his barnstorming account of what the programme book oddly described as the “sixth Hungarian Rhapsody No 6” (not the only mistake in a sloppily-proofed publication), although the expressive lyrical aspect of the work was not wholly conveyed, being subjugated by Lang Lang putting virtuosity first – reminiscent not so much of Liberace, as of Horowitz on a bad night.