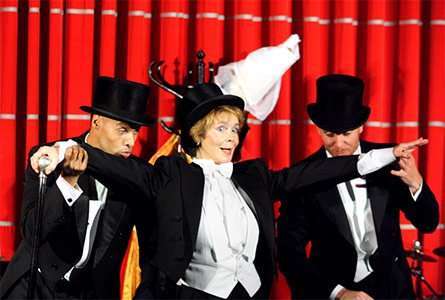 There was palpable excitement in the air at The Crazy Coqs as a packed audience waited to see the launch of Celia Imrie’s cabaret act. A long-time favourite on television and radio and in films and theatre too, Imrie is a foremost character actress, particularly known for her work with Victoria Wood. She won the Olivier Award as best supporting actress for her hilarious turn as Miss Babs in the musical adaptation of Acorn Antiques, but her diverse talent has embraced far more than that, including Shakespeare, Shaw, Sheridan, Congreve, Giraudoux and Alan Bennett, plus such musicals as The Boy Friend and Cabaret.

Would she be telling us inside stories about her rich career, or reminding us of numbers she had once sung? The answer is ‘no’ to those speculations. Imrie’s performance will, in fact, revive memories for older folk of Kay Thompson, whose act at the Café de Paris was slickly honed to include song and humour in a skilfully crafted, highly sophisticated programme. Whereas Thompson had four young men behind her, Imrie has two, who dance with her and sometimes support on the vocals and in the sketches.

Imrie opens her set daringly, running through the room in a straitjacket pursued by two orderlies – perhaps a reference to her experience at the age of 14 when a controversial psychiatrist treating her for anorexia nervosa gave her drastic shock treatment which still haunts her. After a convincing rendition of Annie Ross and Wardell Grey’s ‘Twisted’, she enacts one of the funniest sketches ever written about a nightmare, Thomas Meehan’s account of a hostess’s dream that a succession of guests arrive at her party, all with three-letter names, one of whom (Yma Sumac) insists on each arrival being formally introduced to the others. Written for a TV special starring Anne Bancroft, it is a hilarious conceit that is expertly handled by Imrie, provoking hearty laughter.

The diversity of her act is signalled by a transition from the that sketch to a sinuously sexy routine with her two hunks (Tristan Temple and Todd Talbot) as she sings Carole King and Gerry Goffin’s ‘Go away, little boy’. The great days of intimate revue are then plundered for Alan Melville’s ‘Common talk’, in which a recently widowed lady swaps her Ebury Street flat for a house overlooking Wimbledon Common, only to find that the Common is… common. Annie Ross is evoked once more with the challenging vocalise rendition of ‘Rondo à la Turk’, adapted from the finale of Mozart’s Piano Sonata K331, the breathless lyrics by Bill Solly.

Imrie’s first dip into the Broadway songbook is for Kern and Hammerstein’s ‘All in fun’, followed later by the equally gorgeous ‘Once upon a time’ by Strouse and Adams. Imrie sings both with requisite poignancy. She is less successful with the droll ‘Madame la palma’, a snake-charmer’s lament originally introduced by Hermione Gingold, or a number written specially for her by Lynda La Plante satirising the agonies of trying to reach a large corporation’s apposite department – perhaps too accurate to be funny. Arabella Weir’s ‘On the game’, in which an aging woman finds the lingo hard to fathom when she tries prostitution, is another sketch that fails to ignite, but Imrie has the skill to now fix these spots.

Other pleasures include an unexpected ‘Blacksmith blues’, the 1952 hit that has Imrie swinging with her two men, Alan Melville and Charles Zwar’s sketch, ‘Which witch?’, with Imrie playing an actress who will only accept the offer to tour in Macbeth if she can play the witch with the best curse, a top hat and tails routine to ‘Love ’em and leave ’em alone’, a song introduced by the legendary Hetty King, and Jerry Herman’s amusing ‘Where in the world is my prince?’.

Unusually, Imrie failed at any point to acknowledge the audience, introducing neither herself nor her colleagues, Nick Finlow and Mike Porter, or crediting choreographer Steven Harris. Her final number, however, incorporates audience participation, with Talbot and Temple handing out sailor hats so that we could join in for the delightfully catchy Noel Gay/Frank Eyton hit introduced in the film Sailors Three by Tommy Trinder, ‘All over the place’. To some extent, that title might describe Imrie’s act at the moment, but she is such a talented lady that one hopes she will be accentuating the positive in creating a fully satisfying cabaret evening.