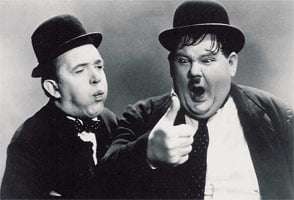 Everybody loves Laurel and Hardy. They have universal appeal and a style of comedy that, unlike that of Chaplin, never dates. They eschewed sentimentality – unlike Chaplin – and concentrated on just making their audience laugh. Even fellow-actor Buster Keaton, one of the best comic performers in cinema history, admitted they were the greatest ever. Like Keaton and Chaplin much of Laurel and Hardy’s humour relied on physicality in which they took so many hard knocks; it might well have been called the ‘cinema of cruelty’. We laugh at them going through the most uncomfortable routines in which they, their fellow performers and often all the sets and props are completely demolished in fantastic displays of rampant destruction.

They were the original odd couple. Englishman Stan Laurel (Arthur Stanley Jefferson) was born in 1890 in Ulverston, Cumbria to a family of actors. He moved to Scotland and at age 16 joined Fred Karno’s troupe of touring actors which included Chaplin for whom Laurel was understudy. When the company went to the US he soon got into films and worked with American comic-actor Oliver Hardy (born Los Angeles 1892) in a silent short called “The Lucky Dog” (1921) but it was six years later before they were teamed together at the Hal Roach Studios. They hit it off immediately, worked well together and thus was born the greatest double act in cinema history.

This play by Tom McGrath (1940-2009) – this production is dedicated to his memory – takes us through the working lives of Laurel and Hardy from how they met to their departure. The action is set in “a waiting room between this world and the next” and it encompasses much of their verbal and visual humour in sketches and set-pieces recalling some of the many films in which they appeared. Not only were they outstanding music-hall performers in the early days and later on when their film careers had finished, but they also transferred to the silent cinema with great success and, when the movies began to talk, their films were even more successful because much of their humour came in the dialogue, the spoken repartee which usually ended in Oliver Hardy declaring “Here’s another nice mess you’ve gotten us into.” 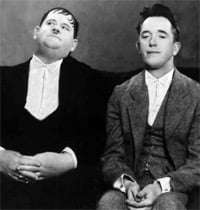 Classic films such as “Way Out West”, “Saps at Sea”, “Sons of the Desert”, “Our Wives” and “A Chump at Oxford” just wouldn’t be the same without sound. “The Music Box”, which won them an Oscar, although completely visual in style, demands sound to make it work.

The amazingly true performances by Neil Bromley and Simon Lloyd as Stan and Ollie begin with the advantage that they resemble these heroes physically. Neil Bromley is thin with a long face and a broad grin and he does the signature crying and quizzical hair-raising routine with great finesse. Simon Lloyd is roly-poly shaped but still, like Hardy, light on his feet, so that visually speaking, the impression works immediately. What’s more, their voices are also uncannily like the real thing. Ollie’s continual harrumphing with great annoyance and barely-suppressed frustration, and Stan’s curious English-American accent and apparent innocence are brilliantly studied characterisations. As performers they also have pin-point timing whether it be in a sketch where they cannot afford a complete round of drinks or the visual slapstick trickery of manipulating a ladder so that nobody, including the theatre audience, gets clobbered.

Of course, part of their act and of their charm was Stan and Ollie’s abilities to sing and dance. Who could forget their nimble capering to ‘Commence to Dancin’’ or ‘The Trail of the Lonesome Pine’ in “Way Out West”. In fact their initial success was repeated in the mid-1970s with the release of an album of their film songs, and ‘Lonesome Pine’ even hit the charts for a time.

The show at Jermyn Street recalls many of these song-routines including ‘Silver Threads Among the Gold’, ‘Swanee’, ‘Old Folks at Home’ (or ‘Way Down Upon the Swanee River’), ‘Shine on Harvest Moon’ and, of course, ‘Commence to Dancin’’ and ‘The Trail of the Lonesome Pine’. And let’s not forget the famous ‘Cuckoo Song’, which was bought from composer Marvin Hatley by Hardy and which they used as their signature tune. Altogether now: “Di do, di do, di do, di do, diddley do, diddley do…”

In the 1940s, after they left Hal Roach, Laurel and Hardy made features for other studios such as Fox and MGM but they had less and less independence and the improvisatory nature of their work decreased. The later films lack the heightened imagination of the earlier ones and their last efforts were sadly atypical of Stan and Ollie at their best. They toured Europe in the 1950s working in variety shows until bad health got the better of them. Ollie died in 1957 but Stan kept on writing material as he had always done, until he died seven years later. Their films are not often shown now on television but they are available on DVD.

With that legacy and two excellent actors like Neil Bromley and Simon Lloyd carrying their banner, the humour and the magic of Laurel and Hardy will never die. This is a life-enhancing show, by turns exceedingly funny and extremely sad. Either way, don’t miss it.