It was all informal, yet utterly professional. Over a casual shirt with wide vertical stripes of unassertive green and yellow, Leif Segerstam’s braces sustained a pair of grey workaday trousers. The Royal Academy of Music Concert Orchestra played Karelia Suite with all the freshness and vigour of a first performance. Something of Segerstam’s own dynamism and sense of immediacy appeared through the resolute, committed playing of these young musicians. ‘Intermezzo’ opened in rare, hushed suspense indicating onlookers awaiting the exuberant, flag-swirling parade. The orchestra ended equally tellingly, conveying the re-settling of the dust during the gradual return to silence. ‘Ballade’ gave quiet yet unsettled respite. ‘Alla marcia’ depicts a besieged castle and had its own momentum – literally: at one point Segerstam turned to audience as if to say “Look! I am superfluous!” He resumed supervising duties when the brass returned to the fore.

Finlandia was not so successful. It was on the way to being challenging, threatening and sombre, but fell short of the feelings of release and liberation that drive the work towards its conclusion. Perhaps, Segerstam did not wish to tax the brass beyond its capacity.

Segerstam’s Symphony No.173 (yes, 173) does not require a conductor. Its anchors are two pianists, one at each side of the orchestra, a trumpeter and the orchestra’s leader. Segerstam himself took the left-positioned piano, sitting to face his fellow musicians. The great sheets of paper in front of him were, I assume, his “Orchestral Diary Sheets”, a regular feature of Segerstam’s compositions, underpinning many of his symphonies. 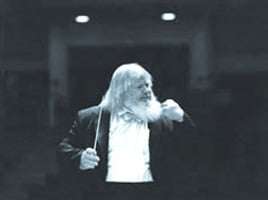 Symphony 173 is a single, monumental utterance, a living statement of several musical themes, weighty and static, containing several textures and movements. The music had a living presence. There was no sense – nor was one intended – of progression or development. Instead, the music had its own breath and its own pulse – according to Segerstam a “free pulsation” in which musical events interact in “time flexibility”. (Segerstam has quite a reputation for hitting upon grand phrases of vivid impenetrability.)

I had a sense of being invited to walk around a three-dimensional sculpture, assailed by different planes and angles. The trumpet made the pronouncements, the pianos fluttered monumentally with commanding tremolos and trills while the violins gathered enough breath to surge passionately and intensely.

The style is post-Modernist, inclining towards the possibility of melody and evidencing a rhythmic actuality. The pulse is evident – even if at times the orchestral texture is opaque. There’s the occasional grand statement, declamatory. In this sense, Segerstam’s music is publicly aware – very much so.

At the beginning, I was pleasurably minded of HK Gruber. Overall, the work made a positive impression and was supported by this enthusiastic, hard-working group of students. They clearly found working with a renowned musician on one of his own compositions, during which he allowed them some initiative, to be a rewarding and inspiring experience.