Even when compared with the rest of his compositional output, Shostakovich’s Violin Sonata is one of his darkest works, and this despite its function as a 60th-birthday gift to David Oistrakh. As a result, listening to it in a sunlit concert-hall requires a little adjustment on the part of the listener.

In this BBC Radio 3 Lunchtime Concert, however, Leila Josefowicz and John Novacek proved to be instantly acclimatised to the mood of the piece. Novacek’s opening statement, in which Shostakovich uses all twelve pitches in the first fourteen notes, was bare in the extreme, while Josefowicz used her vibrato sparingly and to powerful expressive effect. Both were clearly under the surface of this work, reflecting the depression the composer suffered following his heart-attack in 1964 but also finding a strong resolve in the faster music. 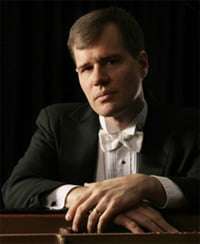 Novacek’s playing throughout was detailed and carefully phrased, containing just the right measure of sustain and staccato, so that the substantial opening Andante fluctuated as appropriate. The slow but steady progressions were tinged with dread, the tension building until its release in the Allegretto. Here the feverish tone of the violin, high up on the G string, was fraught indeed, while the movement itself became something of a moto perpetuo. The third movement’s introductory Largo was heavy-set in tone, though its tread became rather ghostly until the faster music imposed itself again, the ensuing cadenzas from each performer giving a powerful impact.

In response to this, Schubert’s Rondo Brillant felt like ‘light music’, yet this too contained a heavier character in its slow introduction. Once the main themes of the Rondo itself are established the music can be rather stop-start in nature, though the performers can use this to their advantage, which Josefowicz and Novacek did here. The Hungarian march-theme was beautifully rendered, dragging back on the dotted rhythms as appropriate, while the lyrical B major theme offered a sunnier and more relaxed contrast. Both performers clearly enjoyed this piece, with its ‘question and answer’ dialogue, and appreciated the composer’s ability to integrate virtuoso display with emotional content.