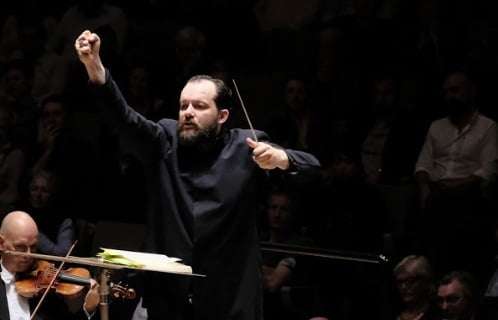 There was prolonged applause as the Leipzig Gewandhaus Orchestra entered for the second of its pair of London concerts. For one listener, at least, the temperature then dropped for Māra by Andris Dzenītis, Andris Nelsons’s forty-year-old fellow-Latvian. Māra, for an orchestra at full strength, aims at evoking ancient pagan spirituality, a Baltic Rite of Spring – according to the programme note, you can discern mythic runes in the score – and Dzenītis goes to town with a central-casting, elemental style – five percussionists provide much glitter and thump, a trumpet shrieks, the lower brass stalks menacingly. There is no discernible ‘voice’ though, and I had the nagging feeling that the music would have gathered more in the way of identity accompanying a similarly eruptive nature film. A brief clearing of the air towards the end ushers in a mournful bass clarinet solo accompanied by some Shostakovich-style flat-lining percussion, and then, after sixteen minutes, the piece vaporised.

There were no identity problems with the Tchaikovsky extracts – two heroines in thrall to mad, bad or sad men, with Kristine Opolais taking no prisoners in Lisa’s Act One scena from The Queen of Spades, and ‘Tatyana’s Letter Scene’ from Eugene Onegin. There were no texts, either printed or projected, but with Opolais’s impassioned, grand-standing delivery, the gist was clear enough, I suppose. As ever, she radiated glamour, her voice was on gleaming form, and her finely judged glides to and from notes and her caressing of pitch were fresh and seductive. The most affecting moment, though, came in Tatyana’s complicit amazement at what she is doing with her life, with Henrik Wahlgren’s oboe and Ralf Götz’s horn hovering in attendance like sorrowful guardian angels, and Opolais wondrously focused and disarmingly innocent. After Nelsons’s efficient guidance through the Dzenītis, his conducting here was on dramatic full-throttle, the orchestra supple and responsive, and the Polonaise had the same theatrical force and swagger.

As the unison A emanated the opening of Mahler’s First Symphony, you could scarcely take in the infinite variety latent in so simple and bold a gesture, and it provided a way into the extraordinary quality and imagination of the Gewandhaus sound. Nelsons has proved himself in Mahler, and he and the orchestra were on exceptional form. Nelsons presented the Wunderhorn, here-and-now immediacy of the First in a way that also, and rather movingly, anticipated Mahler’s delirious acceleration of style and range over a mere two decades. The opening’s elemental noises-off were gradually folded into a more containable, human experience in playing of great insight, and the cellos’ and double basses’ near micro-tonal management of the minor-to-major move out of the slow introduction was a special pleasure. Nelsons honoured Mahler’s ‘leisurely’ instruction, so that all the detail sounded unforced. The Scherzo spared nothing in Bruegelesque stomp, ready-made for solid choreography, while the Trio sidled into a knowing, modern ambivalence, beautifully and slyly played.

I now know how a ghost on timpani might sound, courtesy of Marek Stefula, barely buoying up Rainer Hucke’s equally spectral bass ‘Frère Jacques’ solo at the start of the funeral march third movement, and later Nelsons led the orchestra close to reckless Fiddler on the Roof exuberance in the Klezmer music. Any allusion and irony vanished in the Finale, and the orchestra gave Nelsons everything he asked for – control, terrific momentum and, in the quiet passage just before the thrills of the close, playing that made time stand still. The horns stood in the final peroration, you couldn’t put a cigarette paper between the two timpanists’ ensemble, and, while it was never clear how leader Frank-Michael Erben’s possessed playing related to Nelsons’s rather more laid-back style, the results were consistently electrifying.