Lend Me a Tenor – The Musical
Music by Brad Carroll, book and lyrics by Peter Sham based on the play by Ken Ludwig 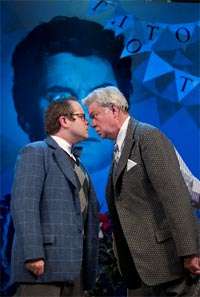 It’s not often that this reviewer is able to say that the musical version of a book or a play or a film or even an opera is an improvement on the original. One only has to think of Gone with the Wind, Lord of the Rings, Whistle Down the Wind or Rent – where you are better off reading or seeing the original – and, in the case of Sunset Boulevard, just re-run the Billy Wilder film, one of the classics of twentieth-century cinema. Lend Me a Tenor, a farce dating from 1986, which opened at the same theatre (the Gielgud was then known as the Globe) and had a successful transfer to Broadway, didn’t seem as funny or as clever as it does now with the addition of songs, a little opera and some splendid choreography.

At the Globe in 1986 I saw Ian Talbot (now the present director) in the role of Max Garber, an opera buff required to take over the role of Otello in Verdi’s eponymous stage-work because the leading man has been given too much wine and tranquilisers. The setting is Cleveland Grand Opera, the time 1934. Impresario Henry Saunders is frantically awaiting the arrival of Italian Tito Merelli, the most famous opera singer in the world, ‘Il Stupendo’. He arrives late with his formidable wife Maria and refuses to rehearse: “I’ve sung Otello fifty times – it’s no big deal.” He is pursued by doting fans and has a reputation for being a ladies’ man and gains a wife suspicious of any female caught in the same room as Tito, be it singers, ladies from the Opera Guild, autograph hunters or housemaids. When Saunders’s daughter Maggie goes to get Tito’s autograph she hides in the closet. Thinking she is another of Tito’s fancy women, Maria storms off in high dudgeon. Pushing farce into action is Max who, to calm Tito down, gives him the wine and tranquilisers. Luckily Max knows the role, so blacks up and goes on as Otello to enormous praise. Tito wakes up, gets dressed as Otello, as does Saunders for the after-show gala. So, we have three Otellos. How it is all resolved is cleverly worked out by the original author, Ken Ludwig, and his musical adapters Peter Sham and Brad Carroll. 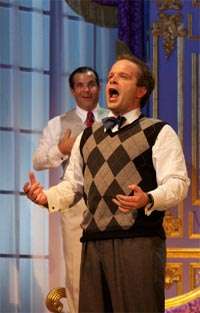 Setting the piece in 1934 is apt because the result resembles one of the many musical shows of that period which had great songs by Cole Porter, Jerome Kern or George Gershwin, coupled with the silliest plots imaginable. Carroll and Sham’s songs are not be of the same class but are acceptable as pastiche numbers. The bonus is that the plot is hilarious and turns Lend Me a Tenor into a real treat of a show. It should also appeal to opera buffs as it opens with the first act of the Verdi as seen from the front of house when Tito is found missing; after the interval we get the end of Act Four, the death of Desdemona, as seen from backstage. Paul Farnsworth’s designs for these scenes are absolutely brilliant, be it the evocation of live theatre, the ballroom, or the penthouse suite of the Cleveland Hotel where most of the action takes place. The latter, as with every farce worth its salt, is littered with doors that can be slammed at any or every point in the proceedings. The ensemble is particularly strong here, all choreographed to within an inch of their lives by Randy Skinner who does wonders with his dancers as they kick up their heels, pirouette and tap their way through the show with an abandon that almost reaches fever pitch. Ian Talbot keeps everything else on the move leaving the audience no time to think about the plot’s machinations and to just laugh at the hilarity of it all.

The principal players are strong. Matthew Kelly gives a wonderfully droll performance as Saunders the frustrated impresario, Cassidy Janson as his daughter Maggie is a fine comedienne with a big, appealing voice and Damian Humbley as Max the substitute tenor could probably sing Otello on his head. Sophie-Louise Dann (a terrific singer and very funny lady) as Diana DiVane, the opera’s Desdemona, brings the house down with the biggest laugh of the evening in her repertoire of excerpts from Puccini, Verdi and Bizet in a sort of bedroom audition for Saunders. Jemma Alexander (standing in for an indisposed Joanna Riding) has a hilarious number with Tito in which they fight while singing their ripostes operatically. As Tito Michael Matus recreates the spirit of every tenor you have ever seen. Lend Me a Tenor could be the best new musical of the year. So far it certainly is.