Bernstein
Mass – a theatre piece for singers, players, and dancers 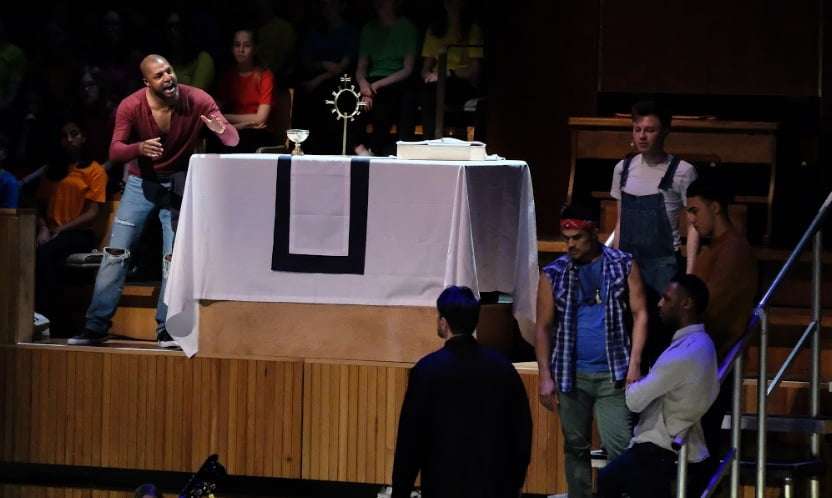 Caught between ambition and megalomania, assertively liberal and me-me-me-centred, petulant, and desperate to be loved, Leonard Bernstein’s Mass continues to maintain its universality despite aspiring to be, like the rock-musical Hair, one of the emblematic summings-up of the 1960s (the premiere of Mass was in 1971, commissioned by Jacqueline Kennedy to mark the opening of the Kennedy Center in Washington, DC). The Kennedy era and ensuing trauma, Martin Luther King, Vietnam, Flower Power and a fast-forward through to Obama, Trump, gun control and #metoo are all covered in the visual references, on four big screens above the stage, that weaponise the work’s context, in Jude Kelly’s straightforward staging with some breathtaking moments – a version of which, if memory serves, was seen in 2010, at the Royal Festival Hall, also with Marin Alsop in charge, basically a raised stage with the NYO sitting either side and a staircase leading up to a rather discreet altar in front of the organ console, with the choirs behind.

Bernstein left no musical stone unturned in Mass – jazz, rock, pre-recorded tape, atonality, Baroque and Broadway – some of it toe-curlingly ‘cool’, and then a lot of it getting under the skin with Bernstein’s enviable facility. The same vertiginous disjunction applies to the words. They follow roughly the sequence of the Roman Catholic mass, in Latin, with some Jewish and Christian prayers and psalms, its devotional remoteness spiked by Bernstein’s and Stephen Schwartz’s additional secular text expressing doubt, lack of interest, and rage over Christianity’s perceived ineffectuality.

Alsop has been championing Mass for years – quite an undertaking given the staging demands and the number of performers involved, nearly five-hundred here – and she directed the different styles into a natural flow, with the result, however, that Broadway and West Side Story are the dominant voice. There are many a moment when things could segue into ‘Maria’ or ‘There’s a place for us’, and the music for the Street Chorus, who precipitate Mass’s central crisis, has a distinct Sharks and Jets danger, complete with hip finger-snapping; and I had forgotten how Mahlerian the orchestral interludes are, here added to with a group of ten dancers, if with mixed results. 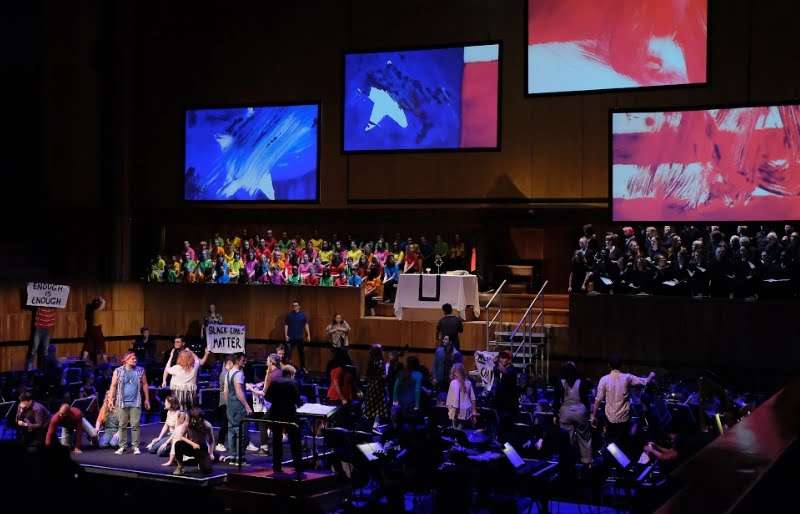 The work revolves around the Celebrant, a huge role that Paolo Szot delivered with superhuman intensity. As with all the solo singers, his voice was amplified, but this didn’t detract from his powerful and vulnerable presence, matched by an opera-Broadway voice hybrid that is irresistibly both fierce and tender. The rapture he brought to his ‘Simple Song’, which cuts through the serial-sounding, pre-recorded ‘Kyries’ with majestic show-time glamour made my eyes prick, and he just got better and better. Interestingly, given Mass’s 1960s context, his colossal, fifteen-minute breakdown seemed nothing less than an LSD trip going horribly off the rails as his faith deserts him, as shocking to the audience as it was to his fellow-performers.

The Celebrant’s three acolytes – trebles Maia Greaves, Leo Jemison and Freddie Jemison – tugged heartstrings throughout and especially in their ‘Lauda, laude’ music towards the end; and the Street Chorus of actor-singers playing the young generation the Church is failing pulled the action decisively into the here and now as well as providing a series of strongly characterised solos. The numerous choirs covered every aspect of diversity and sang out with infectious conviction. The National Youth Orchestra of Great Britain and the Chineke! Junior Orchestra, replete with electric guitars, keyboards, organ and drum-kit, responded to Alsop’s conducting with some astonishingly vivid playing, whether going for the music full-throttle, or providing some superbly expressive wind solos, or retreating into extreme delicacy for some of the quieter accompaniments – and there is a brief but overwhelming march from a big brass band parading in uniform through the auditorium.

This performance didn’t pull its punches, and went over the top in the pulverising confrontation between the Celebrant and the Rest of the World. I still can’t work out how we get from crisis to the comfort of the lovely, quiet, concluding hymn, or what we are supposed to infer from it, but hope is high.