This programme promised much on paper, for a large part of it was made up of works that, for one reason or another, we do not often encounter in the recital room. But to mention the venue for which a great deal of this music was composed immediately confronts us with the main criticism of this event in actual practice. 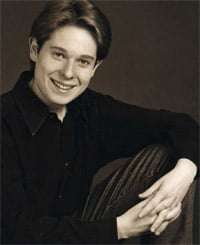 Leonard Schreiber is, self-evidently, a very gifted violinist, and Emmanuel Despax is an equally gifted pianist, but Cadogan Hall has been principally refurbished for symphony orchestras, not as a recital room, and – frankly – Schreiber’s tone did not begin to fill the auditorium with anything like the power that was necessary to ensure every member of his audience could hear him. His playing was, no doubt, consistently beautiful (as one inferred from those passages one could hear) but, sitting towards the back of the Hall, many of the quieter passages were almost inaudible. One could see the expressive nature of his playing, but at times one could barely hear him. This not inconsiderable drawback was exacerbated by Emmanuel Despax playing on full stick throughout, which was demonstrably unsuitable for any proper musical balance.

In addition, Schreiber took up the modern position of standing far behind the pianist’s right shoulder, with the result that neither musician could see the other – a distinct disadvantage in chamber music. Why violinists today seem to think that guesswork should take the place of proper musical ensemble is, I am sure, a legacy from having been taught to stand thus, but give me a violinist who stands in the belly of the piano and can see their partner – who can also see them, and the moment when the point of the bow touches the string – without detriment to the violinist’s tonal projection to the audience. 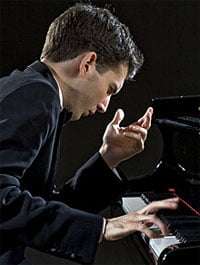 Beethoven’s Romance in F is rarely encountered in recital programmes and is usually heard with orchestra. This was in the main excellently interpreted, as indeed – in those passages one could hear – was Grieg’s C minor Sonata, especially the first movement’s exposition and the finale. Tchaikovsky’s equally rare Souvenir d’un lieu cher in its original version was marred by over twenty latecomers being allowed in whilst the music was being played, interrupting the concentration of those who had been able to retake their seats on time for the second half to begin. This was a pity, for it was clear that Schreiber was giving a noble account of the ‘Méditation’, the first of the three pieces that make up Tchaikovsky’s Opus 42.

Brahms’s D minor Sonata was written to cement the healing of the breach between him and Joseph Joachim; the key of this work is important, for it was Joachim who conducted the first performance of Brahms’s D minor Piano Concerto with the composer as soloist. There is an underlying strength in this Sonata which was only intermittently revealed on this occasion, Schreiber and Despax emphasising the feminine aspects too readily.

The business of letting latecomers in during the music really must be attended to by Cadogan Hall, for it added another unnecessary downer for those who, like me, were fully prepared to given these admirable young artists the benefit of several doubts.