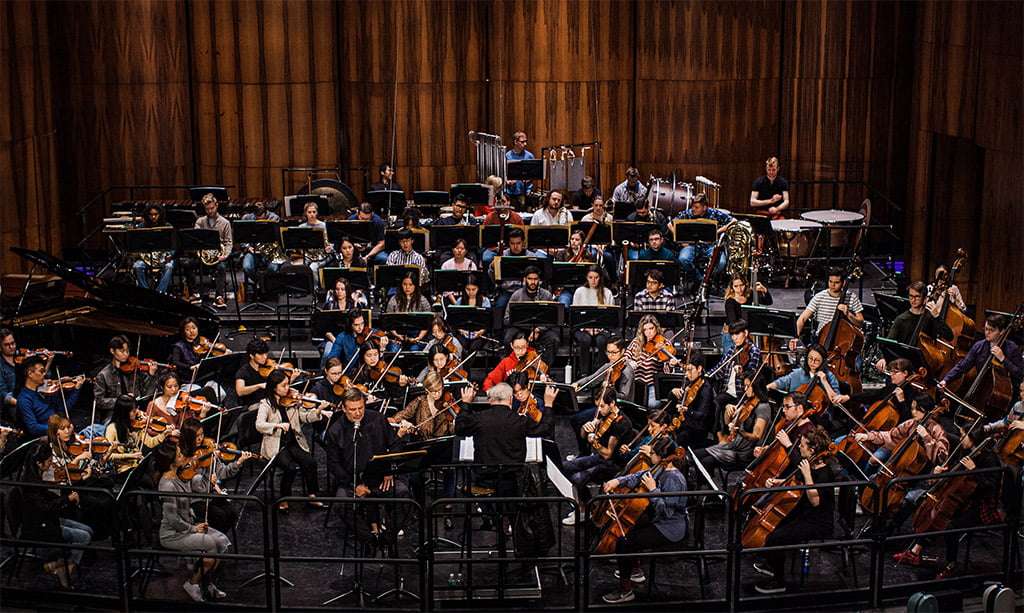 Many luminaries of the classical music world were among those gathered in Neidorff-Karpati Hall to honor Leonard Slatkin, whose 75th birthday concert launched the ‘MSM Icons’ series at the Manhattan School of Music, where he is a Distinguished Visiting Artist. Slatkin conducted the MSM Symphony Orchestra in a program comprised of works connected with significant milestones in his career and with members of his family.

To commemorate two of his conducting debuts, Slatkin began with William Schuman’s New England Triptych, the first work he conducted at Carnegie Hall (1966), and Mikhail Glinka’s Kamarinskaya, the first piece he conducted at the Juilliard School (1968) – on the same stage as tonight’s performance. The MSM musicians responded brilliantly to Slatkin’s direction, with Juhyun Lee’s wonderful clarinet solo in the Glinka a standout among many fine individual contributions. 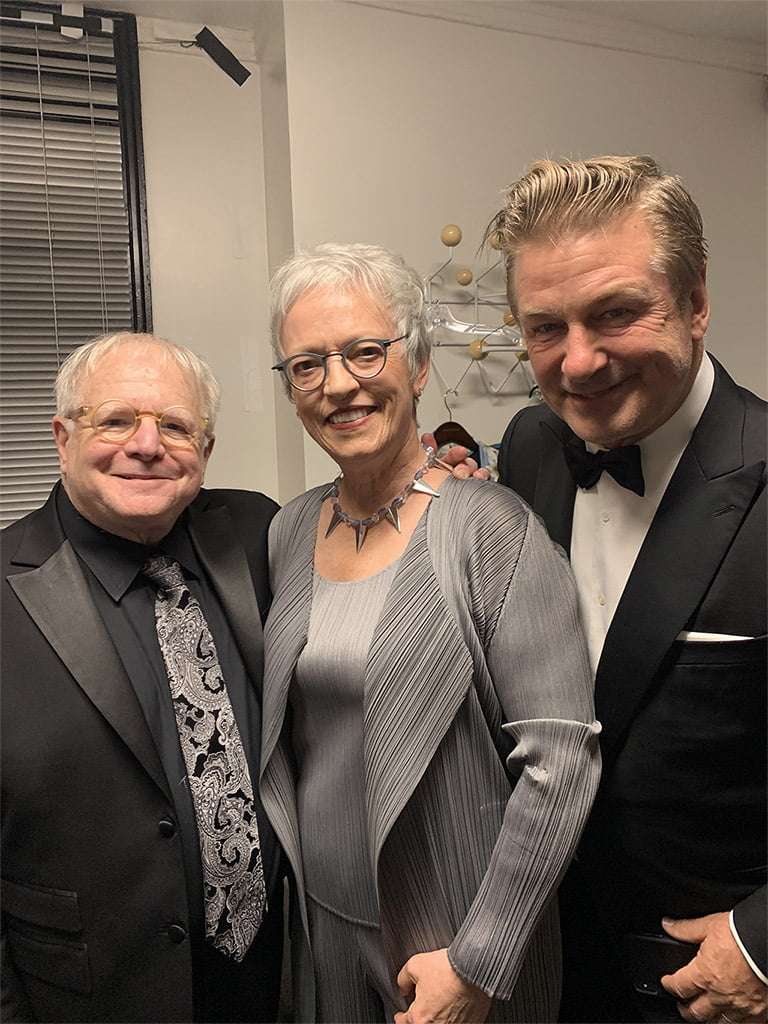 The highlight of the evening was Slatkin’s own composition, The Raven, a setting of five poems by Edgar Allan Poe, superbly recited by the eminent actor Alec Baldwin and excellently played. Each of the first four poems features a different section of the orchestra – winds in ‘The Sleeper’, percussion in ‘The Bells’, strings in ‘Romance’, and brass in ‘The Coliseum’. Each section is preceded by chimes and the recitation of “Once upon a midnight dreary”, the opening line of ‘The Raven’. Baldwin captured the spirit of each poem, particularly the maddening tintinnabulations of ‘The Bells’, speaking – and at moments shouting – as the percussion chimed. Finally, for Poe’s most famous poem, ‘The Raven’, Slatkin employs the entire orchestra, alternately juxtaposing a single solo instrument from one section against the ensemble of the others. Baldwin artfully portrayed the narrator’s torment as the eponymous bird perches above his chamber door, repeatedly intoning “Nevermore”. At its conclusion, the members of the orchestra speak that word repeatedly – whispering at first, and then growing louder to match the orchestral crescendo. Finally, Baldwin once again recited “Once upon a midnight dreary”.

The balance of the program reflected four generations of Slatkin’s family. ‘A Soldier Song’, a short composition by Modest Altschuler, who founded the Russian Symphony Orchestra in New York in 1903, supported Slatkin’s observation that his great-uncle was probably a better conductor than a composer. Slatkin’s brother, cellist Fred Zlotkin, performing on the instrument that their mother, Eleanor Aller, played in the storied Hollywood String Quartet, gave a delicate, atmospheric rendition of Ravel’s Pièce en forme de habanera.

Sir James and Lady Galway performed at the 2011 wedding of Slatkin to composer Cindy McTee, who thanked the Galways with an arrangement for two flutes of the folk song ‘Shenandoah’. They played it gorgeously here on their 18-carat gold flutes, Sir James voicing the famous tune and Lady Galway providing harmony and counterpoint, all set against McTee’s lovely orchestral accompaniment. 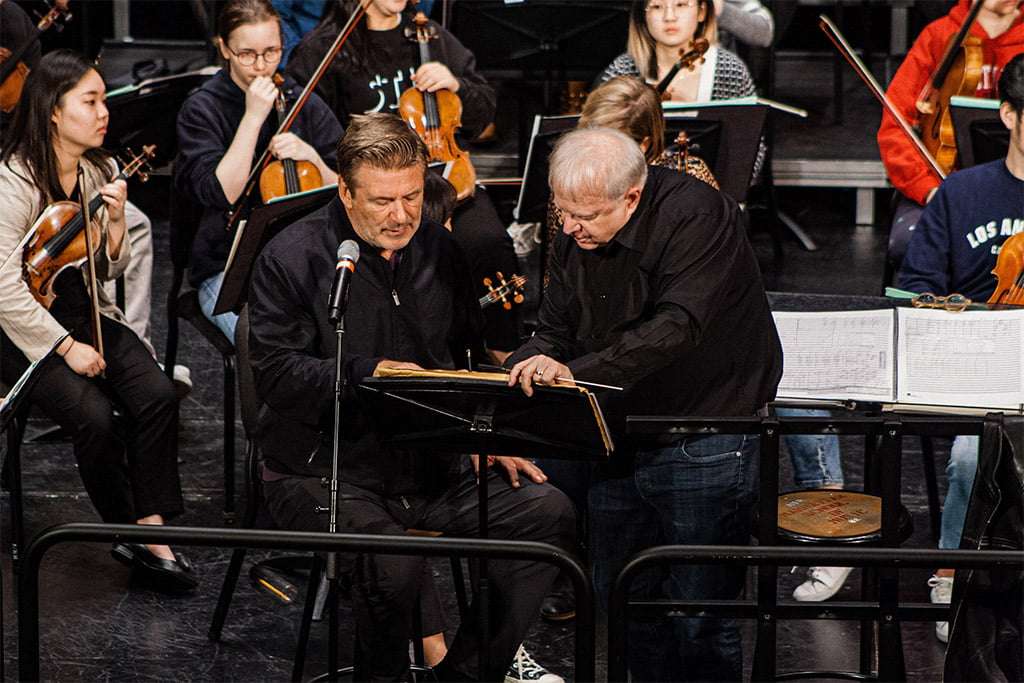 Representing the youngest Slatkin generation was In Fields, composed by Leonard’s son Daniel as a tribute to his father on the occasion of his retirement as Music Director of the Detroit Symphony Orchestra. Daniel, like a number of his ancestors, is establishing a career in the film industry, with several film scores already to his credit, and In Fields evidences his considerable talent for melodic invention and imaginative scoring. The predominantly pastoral work showed off the excellent MSM strings and featured fine solos by Ellen O’Neill on oboe and Joshua Gomberoff on viola – the latter particularly appropriate since Leonard Slatkin had played the viola in his younger days.

The final tribute of the evening was for Leonard Slatkin’s father, Felix Slatkin, who had a brilliant career as violinist and conductor. He was concertmaster of the Twentieth Century Fox Studios, where he met and married cellist Eleanor Aller, with whom he formed the Hollywood String Quartet. He also founded and conducted the Concert Arts Orchestra and served as concertmaster and conductor for Frank Sinatra. He arranged and recorded dozens of whimsical short works based on classical and popular sources, and the concert concluded with three of these works. Although many of Felix’s scores were destroyed or lost, Cindy McTee created transcriptions of his arrangements of ‘Fisher’s Hornpipe’, a traditional Irish fiddle tune, and ‘Wistful Haven’, adapted from Dvořák’s ‘New World’ Symphony. In an even more light-hearted vein is ‘Carmen’s Hoedown’, which folds themes from Bizet’s opera into a western barn dance. It was given a rousing performance that put an exclamation point on the evening. Slatkin was effusive in his thanks to those who had come to honor him, and the audience returned the favor with a long ovation, recalling him to the stage several times.