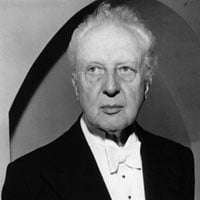 Quite when Leopold Stokowski (1882-1977) wrote his Symphony is not clear. It might have been between 1896 and 1899 when he was studying at the Royal College of Music or it could just have been between 1906 and 1909 (as suggested by Stokowski guru, Edward Johnson). The manuscript of Symphony was stolen from Stokowski’s library, but the orchestral parts were discovered following the conductor’s death and the work reconstructed by Edwin Heilakka, the now-deceased curator at the Curtis Institute, where Stokowski’s papers resided before being transferred to the University of Pennsylvania. It can only be speculation if Stokowski had Symphony sight-read by his orchestras in Cincinnati and Philadelphia and, there being no evidence of a performance, it seems justified to call this RCM one a world premiere.

If the RCM Sinfonietta suggests a small orchestra, the Sinfonietta tag has more to do with the gradation of students, those who are a step away from the Royal College of Music’s Symphony Orchestra, for Stokowski’s Symphony calls for a large orchestra including two tubas and a contrabass clarinet. It isn’t quite the size of “megalomaniacal proportions” as suggested in the programme note (not when compared with Lorin Maazel’s Farewells, which he recently conducted in London).

At 16 minutes (in this performance), Stokowski’s Symphony is an atmospheric piece, the opening suggesting Debussy and Chausson, both with an ear to Wagner, a nod to Impressionism, the two movements (which emerged as one here) not really developing a symphonic argument and suggesting more a tone poem or some darkly suggestive incidental music. One idea comes close to quoting (but not quite) the ‘Dies Irae’ plainchant, and although the flute solos remind of Debussy’s Syrinx and textures occasionally suggest Stravinsky’s “King of the Stars”, but these pieces probably post-date Stokowski’s Symphony (unless a few years later than 1909) but not necessarily Rachmaninov’s The Isle of the Dead, which might been a direct influence or Stokowski was a mystic!

The RCM Sinfonietta and Robin O’Neill (developing a fine conducting career beyond his long-held position as principal bassoonist of the Philharmonia Orchestra) gave a well-prepared account of music that may have come as a slight disappointment in relation to the anticipation of it (the nine various-sized gongs on the platform presumably were simply occupying storage space, for they were not required for this Stokowskian extravaganza – but, as was suggested afterwards, if anyone conducts this piece again, then it would be only apposite – given Stokowski’s emendations to the scores he conducted, and just retribution! – if they added these gongs, and anything else they fancy, to his Symphony!

Although Stokowski recorded Ibert’s Escales and Debussy’s La mer, the concert might have been better integrated by including a Stokowski transcription of Bach and, maybe, his arrangement of Pictures at an Exhibition. Ibert’s Flute Concerto seemed not to belong. It’s a busy neo-classical piece with a lovely and touching slow movement; yet although it’s not long on the clock, it is long on the listening. None of which should detract from Alison Murphy’s superb achievement. She is currently studying at the RCM and gave a brilliant performance, every note (however rapid) was crystal-clear and poised and the central Andante was touchingly bittersweet. A golden future for Alison Murphy seems assured.

The RCM Sinfonietta provided a secure accompaniment even though fewer strings would have probably helped in this revamped, renamed but still very lively acoustic.

La mer tested the students a little beyond themselves, somewhat fallible in execution, a little awkward in turning corners, and a with a gong stroke several bars too early in the last movement. Nevertheless, although the dynamic range was somewhat narrow (not quiet enough at times) and the whole was brightly lit (partly the acoustic) this was a creditable performance, O’Neill making no concessions and lucid in his interpretation of this great piece and including the fanfares in the finale that the composer deleted but which many conductors retain (Ansermet possibly being the first to do so).

At the beginning of the concert, Robin O’Neill had addressed the audience. He mentioned another original piece by Stokowski, Reverie, which its composer once played as an encore. Assuming Reverie can still be played, it would have been nice to have heard it on this occasion – as an encore!