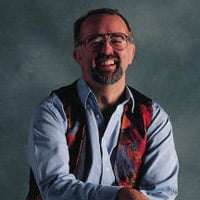 The Phantasie Piano Quartet is a one-movement work, carefully crafted and of great distinction. Its fineness of feeling carries a limpid, refined Romanticism – a quiet voice, in no way declamatory. Frank Bridge is his own man – Brahms’s shadow does not loom over his shoulder.

The performance conveyed all this, precisely and sensitively. With silver-grey restraint, Martin Roscoe and the Leopold players beautifully expressed Bridge’s civilised depth of feeling with a keen sense of the work’s tensile, arc-like structure. Any temptation to make the Phantasie sound ‘bigger’ than it is – more full-blooded, more vigorous or more lusciously melodic – was, wisely, eschewed.

Rebecca Clarke studied with Lionel Tertis. Her Duos – a warm ‘Lullaby’ and a gawky, perky ‘Grotesque’ – gave the viola prominence. Lawrence Power put the instrument’s mellow quality through a soberly judged variety of stances (a little too much vibrato at one point in ‘Lullaby’, which overshadowed the cello). Kate Gould was not without work to do – in melody, she has a sinuous line and she plays a vicious pizzicato with gusto.

Beethoven’s Serenade was astounding – the highlight of the evening. This is a work of genius, the Leopold players declared. They pulled out all the stops, blazoning the youthful work as advancing on its predecessors, instead of lying in the shadow of what is to come. The surging rhythms, the springy vitality, the terse changes and about-turns, the jerky and cheeky short-cuts, the singing slower sections and the sublime continuity of Isabelle van Keulen’s soaring line all displayed an eclectic musical inventiveness to rival Haydn’s.

David Matthews’s Second String Trio has two movements played without a break: slow graduates into faster. The music is tonal and harmonic, in the aegis of Tippet. The references are various, developing into Variations that include a blues, a canon and a chorale. Single notes – mostly Gs – abound in the manner of the drone characteristic of Indian music. I was unstirred. The music’s restraint did not excite me in the way Bridge’s Phantasie had done.

Walton’s Piano Quartet was a different matter altogether. With discrimination, Martin Roscoe – and the Leopold players likewise – adapted his playing style to suit Walton’s youth, abrasiveness and gift for exuberant melody. The latter two movements were outstanding – the Andante, which rightly alerted Sacheverell Sitwell to Walton’s talent, and the barnstorming Allegro molto that follows. The contrast sparkled: the Andante was subtle, ingenious and versatile, whereas the Allegro was raucous, rasping and populist. What masterly performers these Leopold players are – playing both movements to the manner born.

Indeed, consider the range of the evening: the sensitive reticence of the Bridge, the broader Romanticism of Rebecca Clarke, the blazing vitality and surging melody of the Beethoven and the striking individuality of William Walton.