Musical based on the novella by Colette, with music by Frederick Loewe, book and lyrics by Alan Jay Lerner, as produced by Edwin Lester for the Los Angeles and San Francisco Civic Light Opera Associations and by Saint Subber for Broadway 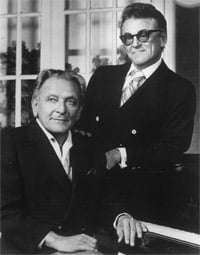 Alan Jay Lerner and Frederick Loewe’s “Gigi” was written as a film musical, the last totally original movie musical to come from the MGM studios. After the success of their show “My Fair Lady” on Broadway, film producer Arthur Freed suggested that they should write a film musical. Loewe was against working in the cinema but agreed to do it in France. Colette’s novella had already been adapted for a French film in 1949, starring Danielle Delorme, and in 1951 Anita Loos had adapted the story, a production that gave Audrey Hepburn her first leading role.

Having made such a success of translating Shaw’s “Pygmalion” into “My Fair Lady”, Lerner and Loewe were an ideal choice to turn the delicate wit of Colette’s original into a charming musical. Lerner and Loewe had also worked previously on such musicals as “Brigadoon” and “Paint Your Wagon” and were to be successful later on with “Camelot”. Lerner was known to MGM from his work on “An American in Paris” with Gene Kelly and Leslie Caron, and from “Royal Wedding” with Fred Astaire. He was a literate writer who could recapture the essence of Colette’s sparkling prose.MGM’s favourite creator of musicals, Vincente Minnelli, who had been responsible for “Meet Me in St Louis”, “The Pirate”, “An American in Paris”, “The Band Wagon”, “Brigadoon” and “Kismet” was to direct. 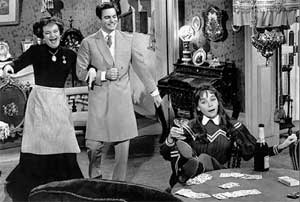 Casting for the film included Leslie Caron in the title role, with Maurice Chevalier as Uncle Honoré, Louis Jourdain as Gaston, Hermione Gingold as Mamita and Ursula Jeans as Aunt Alicia. With such personnel the film couldn’t go wrong. Could it? The first public sneak preview, however, saw Lerner and Loewe unsatisfied with the finished film and they offered to buy up the print from MGM. However, when he studio agreed to some re-shoots and re-orchestrations, the next preview was a great success.

In 1973 producer Edwin Lester of the Los Angeles and San Francisco Light Opera Company commissioned Lerner and Loewe to adapt “Gigi” for the stage. It eventually reached Broadway with Alfred Drake, Daniel Massey, Agnes Moorhead and Karin Wolfe, and it ran for a while, about three months, but was not an enormous success. It has, however, been revived occasionally and has gained in popularity over the years.

It arrives at the Open Air Theatre in Regent’s Park in a handsome and totally charming production by the Open Air’s new director Timothy Sheader and in this setting it works very well indeed. After all, the opening shots of the film are set in the Bois de Boulogne with Chevalier as the ageing roué Honoré thanking heaven that little girls grow up in the most delightful ways.

The stage version of “Gigi” omits some of the (best) songs from the film including ‘(I don’t understand) The Parisians’, ‘Gossip, ‘Gaston’s Soliloquy’ and ‘Say a prayer for me tonight’ which were replaced by ‘The Earth and other minor things’, ‘I never want to go home again’, ‘The Contract’ and ‘In this wide, wide world’. The finest songs are, of course, ‘Thank heaven for little girls’, ‘The night they invented champagne’, ‘I’m glad I’m not young anymore’ and that Oscar-winning title song.

Set in turn-of-the-century Paris, the story of “Gigi” concerns the transition of a gawky young girl into young womanhood. Gigi’s mother, who we never see, is an opera singer and has left the bringing up of her daughter in the hands of Gigi’s grandmother, Mamita. Gigi is a funny awkward little girl and something of a tomboy, but she has reached the age when she needs to have an education in etiquette to become a courtesan. This will involve knowing how to walk properly, how to enter a room and how to attract the best possible man.

If all this sounds calculating and sordid, in Colette’s hands and in the writing of Lerner and Loewe it is witty, funny and charming. Even Honoré, the ageing bachelor, is not so much a ‘dirty old man’ but more the worldly-wise character of experience. His nephew, Gaston, is also a man of leisure and pleasure but has become bored with Parisian high life and all his mistresses. He prefers to relax with Mamita and her granddaughter Gigi whom he considers to be like a younger sister. When they all go to the seaside he begins to realise that Gigi is no longer the funny awkward little girl he knew, for she has blossomed into a beautiful young lady. He would like Gigi to be his mistress but she declines. After some misunderstandings they finally realise they are in love with each other.

In her novella Colette was satirising Parisian society, their mores and morals or lack of them. In Lerner’s book it is still a very funny take on promiscuity but all executed in the best possible taste. Aunt Alicia, Gigi’s mentor in the art of seduction, explains the courtesan’s situation thus: “we don’t get married at once, we get married at last”. Linda Thorson (who succeeded Diana Rigg in “The Avengers”) imbues Alicia with a very amusing mixture of world-weariness and good common sense. As Gaston, Thomas Borchert is a leading man of intelligence and blasé good humour. The no-nonsense, sensible Mamita, is given a nicely rounded performance by Millicent Martin whose ‘I remember it well’ duet with Topol as Honoré is a nostalgic delight. Topol plays Honoré with great insouciance, instilling the character with nothing but charm and in fact rather sending up the whole idea. Lisa O’Hare’s Gigi progresses from tomboyish hoyden to ravishing beauty with conviction, starting out as a gauche little girl and emerging, “My Fair Lady”-like, into womanhood.

There is such joie de vivre in the numbers in this Open Air staging by a fine chorus of singers and dancers and the production is so well dressed in the Belle Epoque style, that it is a pleasure just watching them perform. Full marks to director Timothy Sheader, choreographer Stephen Mear and designer Yannis Thavoris. Lerner and Loewe would surely be totally delighted and very proud indeed of this production.