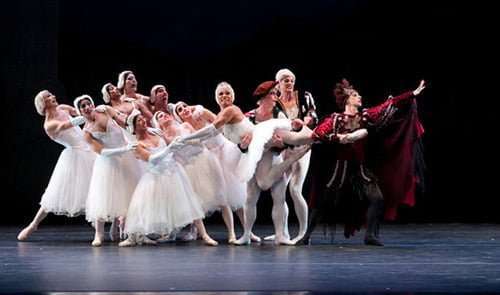 There is something about the Trocks that is just so very endearing. What could be a rather unsubtle, drag-queen one-joke show is about as far from that as one could imagine – however outrageous the mugging and the grimacing, these are dancers who give their all, and, a surprisingly rare attribute on today’s stages, show their deep love and respect for the art form.

The corps de ballet may be the most oddly shaped and sized in existence, the toe shoes the biggest you have ever seen, and the gestures writ ever large, but what these men share is a respect for what they are parodying, tinged these days with a certain nostalgia for the times when ballerinas were temperamental, flamboyant, and foreign. The mystery of ballet is a secret forever kept in our imaginations by the Russians, and so the Trocks hark back to the golden age of companies with the epithet ‘grand’ and performers for whom flashing lights remind them of the Bolshevik revolution. The Trocks are also, bizarrely, a remaining link with those glory days which are now ballet’s legendary times when seemingly supra-human artists graced the stage.

As a company, they remain undimmed, combining outrageous camp, a certain Manhattan brassiness and a desire for technical and stylistic fidelity in their dancing. So when not fluttering inch-long mink eyelashes or pratfalling with the best of them, they invest every fibre of their decidedly male bodies into performing the great works of ballet. This it was in the famous Le Corsaire pas de deux which allied copper-bottomed campery with all the technical tricks the duet is famous for, plus, in the case of Laszlo Major who was impressively good in the male role of Ali, some acrobatic flick-flacks.

What the Trocks also nail is the confirmation of the sneaking suspicion that the corps de ballet, ranged prettily at the stage edges, hate the ballerina and would rather be doing something else instead. Hence the surreal hilarity of one of Esmeralda’s friends lazily chomping on an apple as she emotes through her duet. In an art form where uniformity and impression of effortless perfection are ideals, we also take guilty delight in the mistaken entrance, the chorus girl facing the wrong way, even the odd slip and fall. Jerome Robbins in his comic masterpiece The Concert constructed his famous Mistake Waltz on just such a premise, and the Trocks take it to greater extremes in their constant lifting of the veil of serenity to show the seething tensions and human foibles beneath. And it is funny. It could so easily not be, but the entire company believe so strongly in what they do, and they move so effortlessly from balletic grace to broad comedy that they carry us along with them.

Their Swan Lake Act Two is a classic, mercilessly sending up this most familiar of ballets and yet performing a great deal of the original choreography ‘straight’. It is a real possibility that, if the Royal Ballet’s announced new production of Swan Lake is radical in nature, we will have to watch the Trocks to see more of the real thing…

To end, a barnstorming performance of Paquita, one of the jewels of the classical repertoire, which, despite the jokes, revealed dancers clearly passionate about the idiom, shaping their solos with all the care they could muster – there are many regular, classical ballet companies who could not muster as much enthusiasm, or indeed, proficiency in these demanding solos – Chase Johnsey as Paquita was quite extraordinarily convincing.