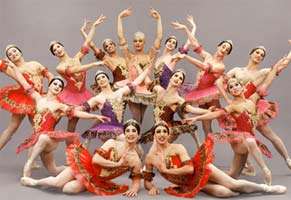 The Trocks are back in town and ceremonially raising the roof of the Peacock yet again. Their initial conceit is to evoke the Monte Carlo companies which existed in the 1930s and 40s and which were initially led by stars of the Russian Imperial Ballet. However, the Trocks are, I feel, more in love with Soviet ballet of the 1950s to the 1970s, with its unashamed camp, both in terms of repertoire and exaggerated dancing and mannerisms. It is a rich seam to mine, and they have been doing it for many a year (since 1974).

A glimpse of the ‘old’ Trocks came in both programmes with Ida Nevasayneva’s Dying Swan, an incomparable interpretation which knocks the feathers off all others. Paul Ghiselin’s twiggy legs and beaky face are perfect for this piece of old schlock – no female ballerina comes close. At the other end of the spectrum, the newest pieces proved to be the weakest. La Trovatiara and Majismas have little to recommend them: the choreography is uninteresting, and in Majismas’ case many an opportunity to send up ‘Spanish’ dancing was missed – let’s face it, sending things up is what the company is all about.

It is also about men dancing as women, and in this the company has taken a change of direction which I think is a mistake: it now has dancers who can make a decent stab at the male roles of the repertoire. In Swan Lake, the Prince now performs his solo; in Majismas, four of the company danced as men all the way through. If you want to see male dancers dancing as men, there are, frankly, many other companies to which you would rather turn; but to see men dancing as women, the Trocks stand alone. It is as simple as that. 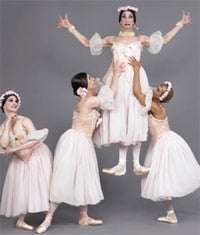 The weaknesses of the first programme had me worried: a Swan Lake which teetered on slapstick, La Trovatiara which was an overlong and underwhelming spoof of the Bolshoi’s recent production of the ‘original’ Le Corsaire and Majismas as a poor end to the evening. It all made me wonder if the blokes on pointe were losing their touch.

Programme Two proved that fear groundless. Giselle saw wonderful dancing – Lariska Dumbchenko (Raffaele Morra) careful with the choreography, soulful of expression and precise of foot alongside the Wilis done up Michael Jackson Thriller-style, a pitch-perfect poke at the ridiculous elements of the narrative – Myrtha’s hurling of her lilies into the wings is funny, and here it was precisely that. Olga Suppohozova (Robert Carter) has been the company virtuoso for some years, and is not prepared yet to give up that crown – she still spins like a top and in both her appearances in programme two, was a delight: a determined virtuoso in the underwater ballet from The Little Humpbacked Horse, and a Diana who certainly likes the look of her Acteon in the famous Pas de Deux, fouettés a-go-go.

Programme One’s highlight was a straight (?) version of the sublime trio Le Pas des Odalisques from Le Corsaire. This was the choreography as it is, no additions, no mugging, and mighty impressive it was too. I rocked with laughter at Vivaldi Suite, a pastiche and anthology of Balanchine’s choreographic tics, led by Katarina Bychkova (Joshua Grant), a very tall leggy ballerina who comes closer to Balanchine’s Amazonian ideal than most women. Balanchine once said: “Ballet is woman”, but here I would venture, “ballet is man pretending to be woman”. Partnered by the tiny Araf Legupski (Camilo Rodriguez), their duets were utterly, deliciously ridiculous, the six foot something Bychkova with the four foot something Legupski making mock of the ideal proportions for partners in classical dance.

The jitters are over. The Trocks are as good as they have been; it’s just that, as with any company and no more so than their inspirations, the companies of the past, they also make mistakes with their programming. Play to your strengths, girls, and the audiences will keep on cheering.