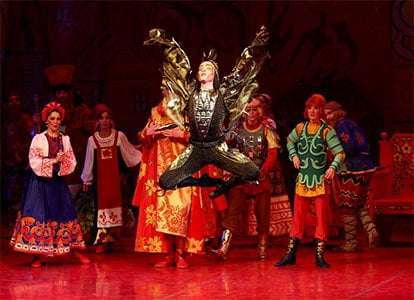 Of Nikolai Rimsky-Korsakov’s fifteen operas, The Golden Cockerel (ou Le Coq d’Or) was his farewell to the form, completed in 1907, the year before he died, and given its posthumous premiere in 1909. It was a stage-work that Rimsky wasn’t planning to write. He had regarded The Legend of the Invisible City of Kitezh (1904) as his operatic summation, but The Golden Cockerel appealed to him given his general love of Pushkin’s prose and also the political climate at the time motivated his creativity.

Don’t meddle with an astrologer (some Cockerel synopsises have him as a sorcerer). Thus the aged King Dodon, tired of war-mongering, wants a peaceful dotage while being able to protect his country’s borders. The Astrologer presents him with a cockerel that will raise a cock-a-doodle-do alarm should there be a threat of invasion. The Astrologer, on his return, wishes that a single request be granted, whatever it is, to which Dodon agrees. Before that, there has been a battle and the King’s two sons have been slain, and then in steps the Queen of Shemakha, who becomes the love of Dodon’s life and his fiancée. It’s her that the Astrologer wants; the King refuses, the pact is broken, catastrophe ensues.

Step forward the Moscow State Music Theatre for Young Audience named after Natalia Sats, a full-time opera and ballet company for children and families uppermost. As part of the current Diaghilev Festival at the London Coliseum, we are invited to be transported back to 1914 to when the impresario presented The Golden Cockerel in Paris as an extravagant opera-ballet, even to recreating the super sets – kaleidoscopic and flowery art nouveau that with excellent lighting creates rainbow effects, then a dusky Act Two followed by a brightly lit Third (before disaster strikes). Fokine’s original choreography has vanished but its modern-day counterpart is full of vibrancy, the dancers sporting great-looking multi-coloured national costumes, and not a few impressive beards of different hues. 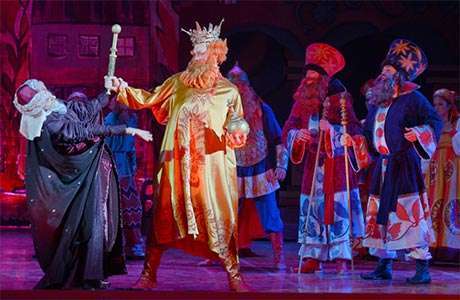 When the Astrologer arrives, Petr Melentiev is a dead-ringer for Diaghilev (and presumably is meant to be), his moustache plays a big part in the identikit, add to which a white scarf and a top hat for the successful man-about-town appearance. In fact, all the singers were formally dressed and sang from the sides of the stage, on a podium with music stands and most needed scores, too. At the literal centre of the action were the dancers; any one role divided between vocalists and hoofers, the bird itself especially athletic. The choir was separated to each side. If the arrangement was a little disconcerting at first, it worked very well overall.

Rimsky-Korsakov was a master of the orchestra and immediately sets up a tense, eerie and exotic prelude, the folksong-imbued music that follows wide-ranging in its colour and moods, rapturous, rustically vital, imperialistically swaggering, tender, and always communicating something picturesque and intrinsic; Rimsky made an extended orchestral Suite of choice moments (as he did from several of his operas), so it was good to hear familiar motifs and swathes of melody in their staged context.

If there was little interaction between the singers, in fixed position guarded by lecterns, when the King and Queen approached each other, meet centrally and touch, then this became a significant moment. And the Queen herself – wow! – Olesya Titenko (singing from memory) was simply wonderful: hers is a great voice spun from silken thread, wonderfully modulated (never shrill) and she has a magnetic stage-presence. Her character though is not so keen on Dodon – the Queen thinks him a “vile old crab” and that “a camel puts your skills to shame”; she is after all from a hostile country. 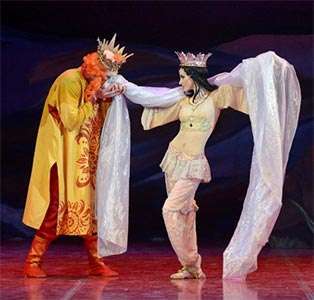 It should be noted though that some roles are double- and triple-cast, so maybe this was her one night. Otherwise, the singers (slightly variable) made pulsating contributions, not least Alexander Tsilinko as Dodon, suitably commanding, and Melentiev proved a suave Astrologer, if a little strained at times in what is a cruelly high tenor part.

The Golden Cockerel, even if an afterthought in Rimsky’s canon, contains much that is wonderful and finds the composer in highly inventive form, whether the spooky suggestive of Act Two or the martial parade of Act Three when Dodon returns with his intended but before the Astrologer’s fateful reappearance. In the pit, the odd mishap aside, the music’s Slavic soulfulness and its festive brightness were authentically reproduced under a vigorous Alevtina Ioffe (a lady conductor who wields an animated baton). The Golden Cockerel is escapist opera, fantasy and fragrance to the fore. For all that Rimsky was a textbook teacher and a corrector of others’ work, not least Mussorgsky, he introduces some striking invention and flamboyant scoring.

The Golden Cockerel is really worth flying the nest for at any time, and this all-singing, all-dancing and vivid production is certainly one to catch. Perhaps Rimsky-Korsakov’s operatic ventures are not universally known, so there is a list below. He is today a composer who is a regular through a handful of works, but, as for Dvořák, there seems a very strong case to look beyond those pieces that are everyday.