My Trip Down the Pink Carpet
A one-man show with and by Leslie Jordan, based on his autobiography 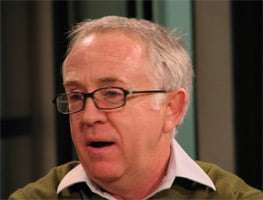 The diminutive Leslie Jordan will be mostly known in the UK for his Emmy Award-winning appearances in the US television series “Will and Grace”, playing the pint-sized vicious gossip Beverley Leslie, a part he tells us was originally intended for Joan Collins. He has also appeared on “Ally McBeal”, “Boston Legal”, “Monk”, “Murphy Brown” and “Sordid Lives”, as well as a slew of other television shows, films, plays and commercials. He generally plays variations of his own personality and has had several stage-shows based on his life, of which “My Trip Down the Pink Carpet” is the latest, following a three-month season last year in New York.

In 1982 little Leslie stepped off a Greyhound bus which he had taken from his home town in Chattanooga (Tennessee) to ‘Tinseltown’, landing him on the corner of Hollywood and Vine with 1,200 dollars sewn into his underwear. Since then he has never looked back – except to reminisce on his home-life way-back-when in Tennessee. His opening line in his marvellous, ever-so Southern drawl is “I am the gayest person I know.” His book and his show detail his journey from within the closet when he believed he was the only homosexual man in the world, consumed with guilt and self-loathing, to his arrival on the red – or in his case the pink – carpet of fame in Hollywood and beyond. He appears to have prospered by living on his wits and to have had a good deal of fun over the last thirty years, along with spells of drinking and drug-taking that landed him in jail, alongside Robert Downey Jr.

Leslie will name-drop when he has to – he’s had hilarious encounters with Faye Dunaway and George Clooney and a not-so-funny one with Boy George when they worked in the desert on a Japanese Sake (rice wine) commercial with Leslie dressed as a monkey – he has led a very public life working with figures from all walks of the entertainment business, although his life has at times been a poignant one as he describes the terrors of being gay in a community that couldn’t accept anything out of the ordinary and in a church that made him feel ashamed of who he was. His romantic fantasies about the other boys at school will ring bells in more than a few hearts and his adoration of the football quarterback and hatred of the sportsman’s cheerleader-girlfriend almost led to inclinations of murder. Instead he transferred his wish-fulfilment towards the president of the school Bible class. These stories lead-up to the time he acquired the telephone number of a known pervert in his home-town who he would call and pretend to be a sexy young girl just out for a thrill. He eventually got to go to the Cross Keys Lounge, the only gay bar in downtown Chattanooga, egged-on by two drunken transvestites, and then he finally discovered that he was not the only gay man in town.

This is a great evening’s entertainment, both hilarious and truthful, shot with a few sorrows, but Leslie Jordan is a delightful person to meet and could be compared to Quentin Crisp but minus his posturing and up-tightness. Musically Leslie Jordan is a disco-queen manqué – at age 55 he’s still a good little mover on the dance floor – and he gives us some examples of his favourite ‘drag’ songs which he sang to himself in the privacy of his bedroom. They include ‘The way of love’ (Cher), ‘The night the lights went out in Georgia’ (Vicki Carr), Bobbie Gentry’s ‘Fancy’ and ‘Ode to Billy Joe’, Dusty Springfield’s ‘Son of a preacher man’, Janis Joplin’s ‘Maybe’, Joan Baez’s ‘The night they drove old Dixie down’, Sammi Smith’s ‘Help me make it through the night’ and not forgetting Tammy Wynette’s anthem for queens everywhere, ‘Till I can make it on my own’.

I don’t think Shaftesbury Avenue has had such a good laugh in ages – the pocket-sized Leslie Jordan (he’s possibly even shorter that Ronnie Corbett) is a real tonic and shouldn’t be missed.