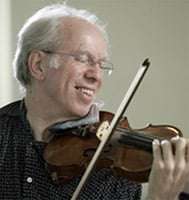 Lera Auerbach’s Sogno di Stabat Mater is a distilled version of a longer piece based on the work of the 18th-century composer Pergolesi. Essentially a concerto grosso for violin, viola, and string ensemble augmented by vibraphone, the piece is a very successful fusion of Baroque and Modernism. Auerbach takes Pergolesi’s dissonant sustained notes and augments them with an added layer of dissonance. The violin and viola have extensive cadenza sections that become increasingly elaborate and harmonically experimental, and when these were followed by sections more obviously inspired by Pergolesi, the effect was quite beautiful. Gidon Kremer’s tone was less warm than Ula Ulijona’s, yet his expressivity and technical brilliance were thrilling.Kancheli’s Silent Prayer (2007) was in the same vein as the Auerbach, with its spiritual overtones, fragmented sections, and mesh of genres. The piece was composed to commemorate the milestone birthdays of Kremer and Mstislav Rostropovich, the latter of whom died shortly after the work was completed, and whose death inspired the title. Scored for violin, cello, string orchestra, percussion, and recorded voice, the piece juxtaposes simple folk-style melodic segments with sections of high musical sophistication. The work has many moments of great aesthetic beauty, particularly in the more harmonically complex fragments. It came as no surprise that Kancheli is also a composer for film, in that the piece seemed in need of visuals in order to gain structural coherence. Kremer and Giedre Dirvanauskaite had perfectly matched intonation in their many unison passages, and both brought passionate spirit to the performance. The main drawback of the work is the prominence of the taped voice with the solo instruments often providing contrapuntal accompaniment. It was distracting to hear a recorded electronic hiss so conspicuously when it seemed incongruent to the work. Hearing the disembodied voice only left the listener wondering how much more effective the performance would have been with a live singer able to react to the violin’s musical interjections.The arrangement of Beethoven’s Opus 131 keeps the piece intact, varying it only by using the orchestra’s principal string-players as soloists at times, with the very occasional addition of double basses. The contrast of the soloists versus tutti sections was quite cleverly done, but the version ultimately sounded like an academic exercise. Kremer played the role of solo first violinist, and in the sections without ensemble, he consistently purveyed great sensitivity to phrasing, which was matched by the other solo players. Yet overall the piece failed in this form. En masse and sans conductor, there was no subtlety of articulation or a directional arc. The gains in volume and drama were annulled by the lack of variation in dynamics and by poor balance. Perhaps by necessity rubato was all but eliminated in tutti sections. The sense of light one expects in the Allegro molto vivace following the opening fugue was lacking. The Andante ma non troppo was much too bass-heavy in the pizzicatos. The scherzo was the biggest disappointment in its sloppiness, even though it was taken at quite a slow tempo. In the finale, there were glimpses of what such an arrangement strived to become. The power of a large ensemble might have served this movement well, and the arrangers sensibly left the more delicate filigree passagework in the hands of the principals. However, there was not enough commitment to the unity of articulation, and balance problems persisted, issues that might have been eliminated with the presence of a conductor.Kremer and percussionist Pushkarev were soloists in the first encore, Astor Piazzolla’s Michaelangelo 70. Kremer’s harsh tone caught the spirit of this jazzy work, and Pushkarev was dazzling on the vibraphone. A second encore was offered in humorous fashion, a rendition of Ernst Toch’s Geographical Fugue, a piece for a cappella spoken voices chanting and shouting various geographical locations. The musicians put down their instruments and gave an enthusiastic performance substituting the names of famous musicians for locations. The performers’ Eastern European accents added to the fun of trying to recognize a comprehensive name-check.