Mozart
Die Zauberflöte, K620 – Singspiel in two Acts to a libretto by Emanuel Schikaneder [sung in German, with English supertitles by Megan Young]

This Mostly Mozart performance marked the New York premiere of this highly arresting and well-traveled production of The Magic Flute. Premiered as part of Komische Oper Berlin’s 2012-13 season, it’s a collaboration between Barrie Kosky and the UK theater troupe 1927. Mozart and Emanuel Schikaneder envisaged Die Zauberflöte as a theatrical extravaganza full of extraordinary stage effects, and that is precisely what Kosky, Suzanne Andrade and Paul Barritt deliver. 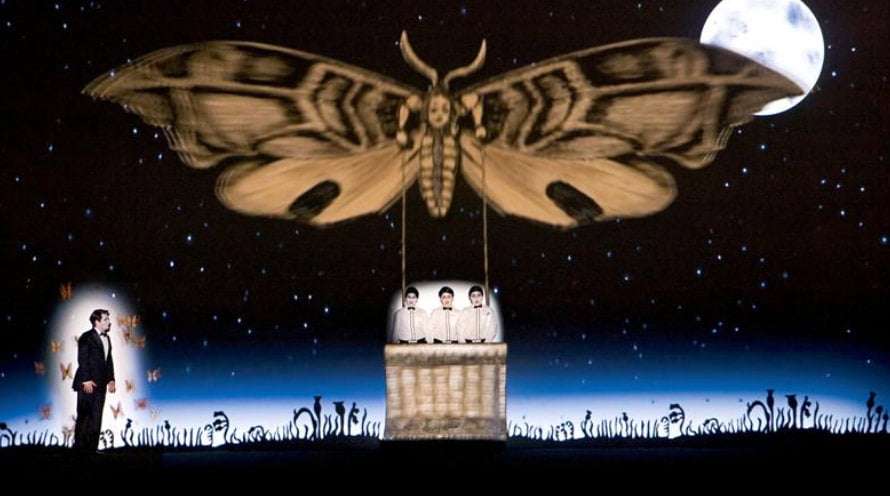 The concept sounds simple enough, a huge screen with live performers interacting with hand-crafted animations. But what the audience experiences is much more than that. The production revels in the work’s wide array of genres, using colorful and masterfully inventive projections to successfully evoke silent films and Weimar cabaret, bringing music and story to life in an enchanting and completely original operatic experience.

The singers pop up, disappear and then emerge again on movable platforms against the monitor onto which a wide array of animated characters and scenery are continuously projected. The main characters are heavily inspired by silent-film legends. Papageno – with his deadpan facial expression, knockabout moves and pork-pie hat – is a Buster Keaton lookalike, and Pamina, with her helmet-like bob, is a Louise Brooks match. Monostatos is a thoroughly menacing Nosferatu, whereas the Queen of the Night is a malicious and mammoth-size black widow spider, spouting daggers at her enemies. Tamino is a kohl-eyed, besuited and altogether charming archetypal movie hero. The boy-spirits are bespectacled, benevolent moths, and the mysterious Sarastro is portrayed as a top-hatted Victorian era showman.

The main roles are double-cast, and this opening night (with three more to come) featured superb singing. The visually heavy, constantly moving, over-the-top fantastical mix of film and live action imposes huge limitations on the singers’ ability to interact with the animations – the projected images at times threatening to eclipse the performers. But the vocally and dramatically gifted cast is equal to the task. Julien Behr shines as Tamino, making an especially appealing impression with his effortlessly smooth and gleaming tenor, while Maureen McKay with her lustrous soprano delivers an equally stand-out performance as Pamina. Rodion Pogossov uses his highly polished baritone and comedic skills to effectively convey the good-natured goofiness of Papageno. Audrey Luna (replacing an indisposed Christina Poulitsi) is appropriately menacing as the Queen of the Night and offers a perfectly thrilling rendition of ‘Der Hölle Rache kocht in meinem Herzen’ (Hell’s vengeance boils my heart). There is also impressive singing from the others.

Louis Langrée, conducting the first ever fully-staged Mozart opera in the Festival’s fifty-three-year history, draws a wonderfully supple, elegant and expressive reading of this brilliant and varied score.