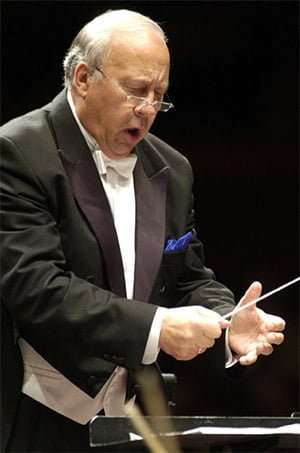 The White Light Festival continued its diverse and stimulating series with “Word Made Flesh”, including one of Sibelius’s most popular symphonies and three sacred choral works – by Arvo Pärt and Mozart. Despite having to endure the rigors of an extensive US tour (15 concerts in 19 days), the Estonian National Symphony Orchestra seemed mostly in fine fettle, producing a brilliant sheen in the strings and elegant wind timbres. Also evident were the multi-talented capabilities of the Estonian Philharmonic Chamber Choir.

The concert opened with Veljo Tormis’s Overture No.2. Born in 1930, Tormis has written more than 500 choral songs, many based on Estonian folk music. Overture No.2 (1959) is possibly the best of his relatively few orchestral works. After an ominous elegiac opening, the music bursts out with a driving fury born of the ardent struggle of a country and its people under siege. A relatively calmer middle section is imbued with underlying tension that soon gives way to the return of the powerful main subject that insistently drives forward to a shattering conclusion. Neeme Järvi led the ENSO in a strongly etched, forceful performance, impressive in its solid musicianship, vital energy and dynamic thrust. Violins waxed rhapsodic on the lyrical subsidiary subject, while the brass enhanced the closing section with robust, well-blended brilliance.

The stars of the evening were the twenty-five members of the Chamber Choir, singing with remarkable precision, clarity of articulation, and a natural fluidity that captured the nuances of the three works they performed. First came Pärt’s In principio, a work in five brief movements set to a New Testament text (John 1:1-14) that begins with the familiar “In the beginning was the Word”. Pärt’s translucent linear flow, often based upon ancient chant, is principally homophonic and rarely rises above piano. In the first movement, sustained tones in the chorus float by seamlessly, unaffected by darting flecks of figurative material from strings and winds. Although the pace of the angular walking-bass rhythm in the second movement was too weighty and stiff, the chorus elicited a comforting, beatific character befitting the text. After a curiously Mozartean third section, imbued with graceful lyricism, a sense of spiritual mystery hovered over the fourth, its rhythmic tread sounding almost funereal. Pärt returns to the simplicity of the first movement in the last, “Word was made flesh”. But despite a strong performance by the Choir, adequate underlying tension seemed lacking. Pärt’s Da pacem Domine that followed was commissioned by Jordi Savall. Chant-like sustained lines again dominate the choral writing, accompanied by quiet harmonies in the orchestra. With a series of singular vocal tones, the choir created a sense of ethereal serenity and timelessness.

Mozart’s Ave verum corpus, written in the last year of his life, is a brief choral work infused with the characteristics of his other late works, particularly the lofty poignancy of Die Zauberflöte and the Requiem. Once again the Choir performed superbly, its hushed tones softly fading out at the close as if merging with the infinite. The audience was so taken with this splendid rendering that Järvi reprised it, this time spiced with quirky emphatic accentuation and fussy phrasing.

In Sibelius’s Fifth Symphony, one might expect the ENSO to take full opportunity to display its prowess. But although this orchestra has many strong qualities, some of which emerged here, there were also several disconcerting problems. The difficulties began with the opening bars, played rather raggedly by the woodwinds, which were dogged by intonation problems throughout. Exaggerated accents that seemed forced (despite the sforzando markings) gave the first movement an angularity that seemed alien to the music’s aesthetic character. A rather dolorous quality haunted Peeter Sarapou’s bassoon solo on the syncopated subsidiary theme. After the tempo increased to Allegro moderato, woodwinds gave the triple-meter theme a rather jolly aspect, yet as the music proceeded, its rhythmic regularity became slightly stiff until the increasing velocity of the closing section whipped up the orchestra into an almost frenzied conclusion. When some members of the audience applauded, Järvi turned and put a finger to his lips with a wry smile.

Cellos and later the solo flute seemed a bit out of phase at the beginning of the Andante middle movement, but the lilting quality of this music came through, particularly in the violins’ rhapsodic treatment of their lyrical descending theme. A seamless thread wove the strands of this movement together save for some rigidity. Occasionally fragmented phrases were abruptly cut off, making them sound as if they were rough-hewn from stone. A fine sense of forward motion and rhythmic precision during the opening section of the finale seemed to bode well, but the horns were rather indecisive playing the chords that have such an important role. The brass also seemed rather subdued, even at the climax of the opening section, where tempered accents on the repeating three-note bell-like figure put a damper on the music’s robust, uplifting character. The mysterious ppp violin figuration was embellished with strong accents on protruding lower string tones. During the Largamente assai coda, brass again seemed too restrained to generate the sense of arrival that should emerge during the stirring conclusion. At the very end, the timpani added extra emphasis to the grace notes that garnish the last two strokes, contradicting Sibelius’s slash through these notes to indicate that they should be played like a flicker rather than at half the value of the notes to which they are linked. That revisionism gave a strange touch to the end of this rather uneven performance. For an encore there was a beautifully played account of Sibelius’s Andante festivo for strings and timpani.