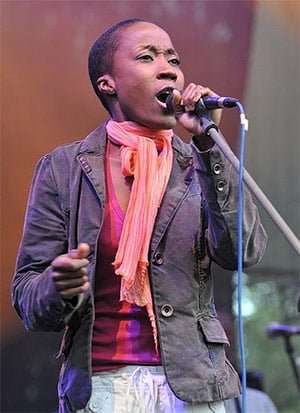 Lincoln Center’s White Light Festival takes its name from something that Arvo Pärt said: “I could compare my music to white light, which contains all colors. Only a prism can divide the colors and make them appear; this prism could be the spirit of the listener.” That prism is in full force with the Festival’s diverse offerings – during which a Beethoven Mass and a singer from Mali feel like a perfectly reasonable mix of concerts.

Rokia Traoré’s spirited and graceful performance left the audience in rapture, but she took her time getting us there. She arrived in a short and sculptural gray dress, an arresting visual accent as she warmed up her husky voice in ‘Dounia’. With just her guitar lines and Giovanni Ferrario’s reverberating chords for accompaniment, the music was raw and strangely spellbinding, like a dark lullaby. Then Mamah Diabaté joined in on the ngoni, a traditional West African lute; its timbre lent a cool and ancient sound as the electric vibe built up. The addition of drums seemed almost unnecessary but completed the song’s progression to full-blown rock.

The next few items created a relaxing and easy atmosphere, from the swaying 1-2-3 beat of ‘Yandé’ (“songwriter unconfirmed”) to the mellow repetition of ‘Ka Moun Kè’ (What Can I Do) via ‘Lalla’ (Maybe). Traoré performed most of her new album, Beautiful Africa, whose title track she wrote out of frustration with Mali’s recent political turmoil. She now resides in the country’s capital, Bamako, having left Mali aged three and studied in Europe while her father worked as a diplomat. Her international roots come through as she sings in Bambara (Mali’s main language), French and English.

Following ‘Mélancolie’, the concert’s energy picked up about halfway through with ‘Zen’ (co-written with Marcel Kanche), Diabaté charming with rapid ngoni solos, the drums throbbed and Traoré started moving her body more expressively. Ferrario’s guitar riffs remained simple but mesmerizing, evoking Robert Fripp and the Edge. ‘Sikey’ (Talk Openly) flowed from fast to slow to fast, with the singer asserting her right to be a performer in rapid-fire words. (She had faced criticism for her career choice because she’s not from the traditional griot caste, whose members serve as praise singers and oral historians.) The highly charged ‘Beautiful Africa’ itself came with hot, bright lights and a burnt-orange background, Traoré’s growls reminiscent of the rocker P. J. Harvey, whose collaborator John Parish produced her album.

The final two tunes, beginning with ‘Kouma’ (Speech), unleashed the full power of Traoré’s song-writing and her ultra-groovy band. Backing singers Fatim Kouyaté and Bintou Soumbounou swooped and swayed their arms like majestic swans; Davide de Rose’s drumbeats sent thumps right through the chest; Ruth Goller channeled Talking Heads bassist Tina Weymouth, and Ferrario went Jimmy Page. ‘Tuit Tuit’ (Tweet Tweet), a reference to bird chirps and not Wall Street’s social media darling, celebrated freedom – as Traoré told us, “it’s about equality, life, what life should be and what it can be.” The joyous song, warmly lit background and Diabaté’s energetic solos made it feel as everyone were sitting outside in the sunshine. As Traoré serenaded each band member and the vocalists took their leave with exuberant dances, there was no doubt that music (of all forms) is one of life’s most natural and purest pleasures.