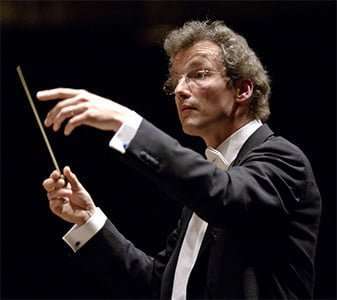 The transcendentally themed concerts at Lincoln Center’s White Light Festival include “The Divine Presence”, a title that aptly captures this program’s theological content. But it could also describe the elation of hearing music in the hands of such an outstanding ensemble as The Cleveland Orchestra. This coupling of Messiaen and Beethoven offered a striking contrast of religious musical celebration. On paper, Trois petites liturgies, written during World War Two, seems traditional enough. Each movement describes an aspect of God’s presence – within us, within himself, and in all things. Messiaen’s music, however, transports us to a very peculiar place, populated with high-pitched female voices, a racing and often agitated piano, the chime-like celesta, and the eerie warbling of one of his favored instruments, the ondes Martenot, as invented by Maurice of that name that uses oscillating tubes to produce various timbres that resemble the spooky-ghost sound in early TV shows and movies. Its glides and vibrations add an incongruous layer to an already quirky mixture of dissonant tones that Messiaen described as “music of colors”.

The visual metaphor is helpful in navigating the composer’s complex sensory landscape; the first movement evokes a misty and pearly place with glints of piano and percussion. The second is darker in mood, with incisive, percussive chords, dissonance in the strings versus piano and chorus, and generous amounts of the ondes. The finale consists of female voices chanting like young Communist recruits and string chords marching around, followed by lyrical, Asian-sounding melodies. It paints a vivid picture of an exotic, otherworldly rainforest, full of strange and vibrant colors and life-forms amid hauntingly tangled masses of vegetation. It is stunning to think of how the deeply Catholic Messiaen imagined his God.

Next was the Grosse Fuge, which Beethoven originally wrote as the finale of the B flat String Quartet (Opus 130) and which perplexed the audience at its premiere in 1826. Beethoven’s publisher asked for modifications, so he wrote a much lighter finale and Grosse Fuge was published separately. Whether string quartet or string orchestra, the Fuge demands sustained intensity and congruence, the musicians needing a kind of telepathic glue. The Cleveland Orchestra string-players were impeccable; each section (double basses added) came up with deliciously assertive and expressive lines that melded together in perfect balance. The quieter passages, along with dynamic dips and swells, were equally strong, particularly a breathtaking diminuendo to an already barely audible pianissimo.

The stirring delivery continued with the C major Mass, which Beethoven wrote in 1807 on commission for Nicholas II, Prince Esterházy whose response was less than flattering, resulting in Beethoven re-dedicating the piece to another royal. Franz Welser-Möst led an exuberant performance whose energy never flagged over its 45 minutes. Luba Orgonášová and Kelley O’Connor were well matched; the latter especially seemed to draw from a place miles within. The soloists and Chorus sang in consistently warm and rich tones, giving the melodious ‘Kyrie’ wonderful breadth and the celebratory Gloria exceptional depth and beauty. The hushed passages elsewhere were no less exquisite, creating many layers of mood and musicality that would stir any soul, regardless of religion.