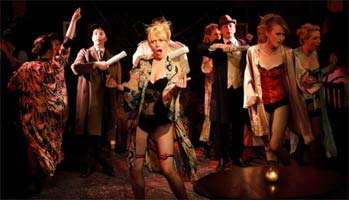 Lionel Bart is chiefly known for “Oliver!”, the musical version of Dickens’s “Oliver Twist”, for which Bart wrote the book, music and lyrics. From its first appearance in 1960 the show has never lost its appeal and is continually revived. It must rate as the classic British musical and stands beside the works of Noël Coward, Ivor Novello or Vivian Ellis, although their shows are not as popular now because they were of their time. Only Sandy Wilson’s “The Boy Friend” has retained its commercial potential, mainly because it is a piece of pastiche. However, there was more to Lionel Bart than just one smash-hit show.

Bart began his musical career by writing songs for Cliff Richard, Tommy Steele, Marty Wilde, Adam Faith, Anthony Newley, Matt Monro, Joe Brown and Russ Conway, all of whom had hits. Bart’s first professional musical was “Lock Up Your Daughters”, an adaptation of Henry Fielding’s “Rape Upon Rape” by Bernard Miles for the opening of his Mermaid Theatre in the City of London in 1959. Laurie Johnson wrote the music and Bart contributed the lyrics. The show ran for over three-hundred performances. It was revived at the Mermaid in 1962 for nearly seven-hundred showings and there was a further revival at Her Majesty’s Theatre the following year.

“Oliver!” came along in 1960 and was an instant hit, had a long run, went to Broadway, was made into a very successful film and has enjoyed tours and revivals. Bart’s subsequent musicals were less successful, although “Blitz!” and “Maggie May” did very well, but “Twang!”, the 1965 show about Robin Hood, and “La Strada”, the 1969 adaptation of the Fellini film, both bombed. “Twang!” was co-directed by Joan Littlewood who was also responsible for “Fings Ain’t Wot They Used T’Be”. In 1959 she was sent a script by former criminal turned writer Frank Norman about life in the underworld of Soho, a play that Littlewood suggested needed songs to make it a play with music. She asked Bart to write the songs, put the show on at the Theatre Royal from where it transferred to the West End the following year, playing at the Garrick Theatre for over two years and nearly nine-hundred outings. Even though reviews were mixed, some critics finding the material thin, it was a huge popular success. Although the title-song became a big hit for Max Bygraves, the show itself doesn’t appear to have been revived until now. 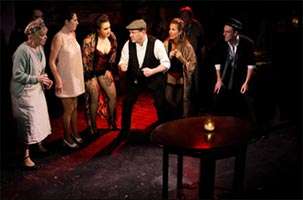 In 1959 “Fings…” must have seemed a refreshing change for audiences brought up on Coward and Novello musicals. “Fings…” was set in a Soho den of iniquity, a gambling joint and whorehouse owned by one Fred Cochran, the razor king of the manor. Returning from prison to his girlfriend Lil, who has been running the place, Cochran finds it is being threatened by a rival gangster, a bent copper and his henchman while Soho is changing from the austerity of the 1950s to the excitingly liberated 1960s. Frank Norman had a keen ear for dialogue and the argot of the criminal fraternity. The script buzzes with vivid patter to an extent that the girlfriend of a visiting toff can’t understand a word.

Many of the lyrics could well apply to today: “There used to be trams, not very quick / Gotcha from place to place / But now there’s just jams half a mile fick / Stay in the human race … I’m walking”. The other songs, even fifty years on, still have a vital spark about them, such as ‘Goodnight dearie’, with its parade of tarts plying their trade, or ‘The ceiling’s comin’ dahn’ as Lil bemoans the state of the club, and ‘Big time’, which even Sammy Davis Jr recorded. The first half ends with a number called ‘Contempery’ [sic] in which a camp interior-decorator called Horace (an over-the-top Richard Foster-King in Larry Grayson mode, but probably right for the time), who could well be a distant relation of Julian and Sandy, demonstrates an early use of palare (camp talk) in a high-stepping number by the entire company as the club gets a refurb to bring it up to date. Nick Winston’s choreography takes off for a show-stopping number.

The original cast included Barbara Windsor, Miriam Karlin, Yootha Joyce, James Booth, Wallas Eaton, Toni Palmer, Glynn Edwards, George Sewell, Maurice Kaufman and Bryan Pringle. At the Union the twenty-strong cast is simply terrific in Phil Willmott’s well-paced production. Hannah-Jane Fox as Lil is more in the mould of Anita Dobson’s Angie in “EastEnders” rather than the Peggy Mitchell of Barbara Windsor. She is the anchor of the production. Neil McCaul as Fred is all bluster while Hadrian Delacey’s Inspector Collins is a right scumbag. Patsy Blower as Mo is the long-suffering dogsbody at the club, where an assortment of hearty, tarty girls spring to real life in the performances of Ruth Alfie Adams, Keiley Hall, Ellie Rose Boswell and Natalie Harman. Barney Ashworth and A. J. Brinkman provide a more than energetic accompaniment to Bart’s ebullient numbers

At odd moments there is a feeling that “Fings…” is a kind of cockney “Guys and Dolls” and had Frank Loesser been writing about Soho he would have called it “Geezers and Birds”. In some of Bart’s patter-songs there is a hint of Gilbert & Sullivan … and, indeed, Bart’s main influences were Noël Coward and W. S. Gilbert, although his favourite lyricist was Lorenz Hart. Bart couldn’t read music or even play the piano properly (“Carry On…” composer Eric Rogers took down the musical notation while Bart sang the songs from “Oliver!” to him) but he had a mind that could produce great melodies and a turn of phrase that hit the right spot at the right time. “Fings Ain’t Wot They Used T’Be” ably demonstrates these abilities and provides an entertaining revival for the ever-enterprising Union Theatre.