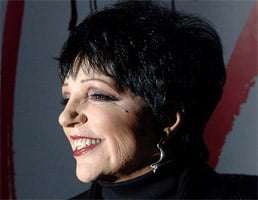 Never a shy wallflower type when it comes to performing, Liza Minnelli, daughter of Judy Garland and film director Vincente Minnelli, inherited her screen and stage talents from both her parents. She admits she likes to show off and, when she does, it’s always way over the top. Like her mother she feeds off audience applause – and what an audience she has! Still, she managed to fill the London Coliseum for three nights on the trot before setting out on a UK tour and then hitting Europe. If this audience is typical she will have enough adoration to last a lifetime – much whistling, stamping, the members of the audience stood up before she had even started, shouted “bravo!” at every number and just wouldn’t let her go. In fact, it’s the Judy Garland story all over again and by the end of a very strenuous evening Liza looked totally exhausted. At age 62 she deserves some sort of medal for lifetime achievement. But, if this tour doesn’t kill her, then nothing will. 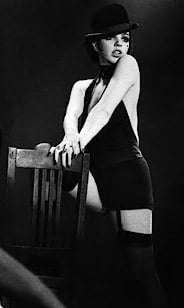 Liza Minnelli’s first professional appearance was in the film “In the Good Old Summertime” in 1949 when she was carried on as a three-year-old. She hit Broadway in 1963 in “Best foot forward”, the following year she played the London Palladium with her mother, and the year after that saw her winning a Tony Award for “Flora the Red Menace”, the first of many Kander & Ebb shows and films that starred Minnelli, such as Cabaret”, “Chicago”, “The Rink” and “The Act”. If there are any superstars left, then Liza Minnelli is surely one of them and she shows no signs of slowing down. It might be better if she did, if only for her own health and well-being. Unfortunately her fanatical audience won’t let her. Every song must be a production number, and hardly anything is sung ‘straight’. Great arrangements they may be for her big, loud band, but just occasionally something quiet would be preferable, if only to let Liza and her audience catch their collective breaths.

“I always used to sit down in the second half”, she quips, “but now I sit down in the first.” Well, why not, after all she has had two replacement hips and was once confined to a wheelchair. Only her determination to sing and dance again allowed her to recover and it is only towards the end of the evening that she exhibits signs of flagging, trying to get her breath and seemingly struggling to return for her curtain calls. But she has lost none of the sheer energy it takes to perform for two hours. She starts fairly slowly with the Gene De Paul/Sammy Cahn song ‘Teach me tonight’, a nice ballad that doesn’t need too much effort to make it work. It’s ironic but Liza pulls out all the stops whereas the late Sylvia Syms lets the lyrics speak for themselves. Kurt Weill’s ‘My ship’ gets a similar treatment coupled with the Gershwins’ ‘The man I love’. Then it’s into Kander & Ebb country with an up-tempo point-number ‘Sara Lee’, a tribute to the great lady of American cakes. 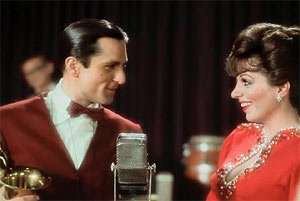 Following a medley of Sondheim’s ‘Old friends’ and ‘Live alone and like it’, remembering that Liza gave Stephen a chart hit with her version of ‘Losing my mind’ with the Pet Shop Boys, there’s more Kander & Ebb. Liza took over from an indisposed Gwen Verdon in the Broadway production of “Chicago” for seven weeks. She sings one of its best numbers, ‘My own best friend’, a song cut from the subsequent film version, to which she gives a plaintive reading, before taking a seat for ‘Maybe this time’ from “Cabaret”. These songs show that Liza has inherited some of her father’s theatrical chutzpah as well as some of her mother’s talent. However, she lacks Garland’s pathos. All the moves are there but there’s a steely quality to the vulnerability.

Things calm down in the second half in which four young men join Liza in a tribute to her godmother Kay Thompson, author, singer, composer and vocal coach at MGM during its musical heyday. Thompson died ten years ago at age 90 and had always been a presence in Liza’s life. Here Liza reproduces Kay’s cabaret act with some of the songs she wrote for herself and for Andy Williams and his three brothers. It is a great act and Liza’s performance is enhanced by the smooth harmonies of the four ‘brothers’ in numbers such as ‘Jubilee’ and ‘I love a violin’ as well as other material such as ‘Liza’, ‘Clap yo’ hands’ and ‘Basin Street Blues’. It’s a telling reminder of a more civilised time when cabaret was sophisticated special material performed with the utmost professionalism. The singing and the dancing here are perfection, making one wish that the whole evening had been devoted to the talents of Kay Thompson. An a cappella encore of ‘I’ll be seeing you’ is stretching it a bit but, game girl that she is, Liza perseveres to the bitter end. Next time, Liza, just try not to pull out all the stops.