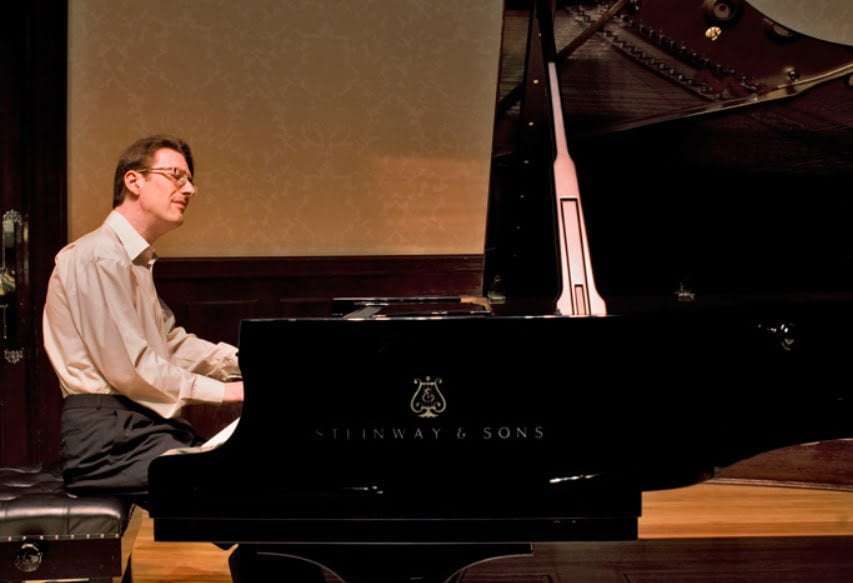 If you are a pianist it can’t be a bad thing to be facially compared with Clifford Curzon at a similar age, and Llŷr Williams (born in 1976) does just this. Embarking here, as a three-year project shared between Wigmore Hall and the Royal Welsh College of Music & Drama, Williams is immersing himself in Beethoven’s 32 Piano Sonatas. And become immersed in the music he does, expression and sound entwined, one feeding the other in each direction. Such an even-handed approach serves the music well, and clearly Williams listens intently to what his fingers and feet are producing, visibly reacting to harmony in one way and to timbre in another. Possibly, given his concentration, he was the only person in the Hall that did not hear the squeaking that was so pronounced in the recital’s first half (and remained, if less so, in the second), which was difficult to locate, and may have been either the very stool on which Williams was seated or related to the actions of his piano’s pedals, but it seemed more furniture-related than mechanical.

The noise was a regrettable distraction during the slow movement of the First of the Opus 2 Sonatas, a shame because Williams brought to it a particular eloquence, as he did joy and capriciousness elsewhere. However, at other points in this work, there was a somewhat earnest and detached approach that had one craving for more colour and flexibility, although there was no lack of dynamism and appropriate force when required.

In the impressive C major Sonata, Williams cannily playing the large-scale No.3 next so as to give each half of his concert a ‘big’ piece, the pianist was thoroughly at home in this totally engaging work. May I be anecdotal and tell of the time when this Sonata was unknown to me. When faced with concurrently brand-new LPs (that dates this story!) of it from Brendel and Gilels, I bought them both and had a good weekend getting to know the music from two keyboard Olympians. Williams gave a wholly marvellous reading of this work, delightfully springy and modulated, dramatic and as outgoing as required, finding depths of utterance, not least in the sombre Adagio, and in the finale pointing the way to Mendelssohn and how Beethoven would influence him.

The A major Sonata opened the second half. Maybe Williams is not one for Beethoven’s line in humour (a quality about which Brendel has lectured), but he has a questing spirit that is descriptive, flamboyant even, while also being alive to the private side of the music, such as the march-like tread of the slow movement over which a solemn song is projected. Here Williams was magnetic, while elsewhere he was both rich and amiable, faster passages attracting delicious swoops as fingers hit keys.

With the ‘Appassionata’, at the outset greater brooding, potency and quieter dynamics would have been welcome. Maybe Williams was trying to disown the erroneous nickname (not of the composer’s doing), but initial staidness gave way to an epic sense of investment on Williams’s part, boundary-breaking on behalf the music and winding down to a sense of desolation – the final chord long-held and chilling – that I have not encountered before at this close. In the variants of the succeeding Andante con moto Williams found real gravitas, the music laden with meaning, and went on to give the finale a thrilling outing, tempestuous, and also structurally pristine with the repeat of the development section (and surely mandatory, so unusual is Beethoven’s request). Here fire and formality were indivisible, and with the acumen of a gold-medal-winning athlete, Williams’s acceleration into the coruscating coda was electrifying, as fast as anything, totally truthful, the breathtaking speed (and amazing clarity) retained to devastating effect right up to the emphatic final chords.

Encores divide opinion, sometimes wanted, sometimes not, sometimes justified, often not! Following the extraordinary end to the ‘Appassionata’, as white-hot as can be imagined, Williams could certainly justify an extra item, but after a long evening of four full-time Sonatas, there was more cause to say thanks and good night. Nevertheless, Williams played Liszt’s ‘Les cloches de Genève’ from the Swiss leg of Années de pèlerinage (Years of Pilgrimage), and he did so with much sensitivity, the bells in question magically cutting through this contemplative nocturne.

London has enjoyed notable traversals of Beethoven’s Piano Sonatas – Barenboim, Lill and Pollini come to mind – and there is every good reason to think that Llŷr Williams is about to join such august company. He returns to Wigmore Hall on February 25.