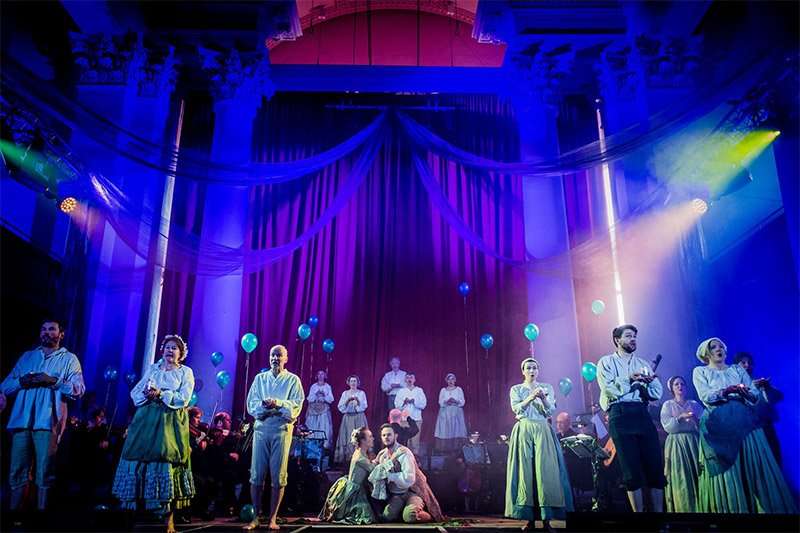 Anniversary mania has gripped the London Handel Festival this year such that, for its staged production of a dramatic work in its opening week, it jettisons the presentation of one of the composer’s thirty-nine surviving full-length Italian opera serie in favour of the English masque or serenata, Acis and Galatea, offered as a “pastoral opera”. It was premiered in 1718 at Cannons whilst Handel worked for James Brydges, Duke of Chandos. Although the Festival’s productions are usually given in the suitably-proportioned Britten Theatre of the Royal College of Music, it is difficult to think of a stage-work by Handel less-suited to the large cavernous space of St John’s (even if it is nearly contemporary with the composition) which dispelled the intimate charm of this Arcadian celebration of innocent guileless love between the eponymous shepherd and nymph.

Martin Parr’s production only imperfectly engages with that idyll. On entering the auditorium one is presented with what looks like a glam-rock birthday party as somewhat psychedelic lights penetrate the haze of dry ice hanging in the building and balloons hover over the orchestra’s desks. The action itself distracts more than it illumines, as the chorus and named characters lope around the audience and mount the stage in bare foot and wearing little more than eighteenth-century undergarments: only the principal roles gain the dignity of coats (and decidedly non-eighteenth-century beards in the case of the males). Balloons dispersed into the auditorium from both the stage and the galleries in the concluding chorus of Act One unwisely encourage the audience to participate (like Richard Strauss’s observation about looking at the brass section of an orchestra), resulting in stray balloons for the remainder of the performance which intermittently burst to distracting effect. 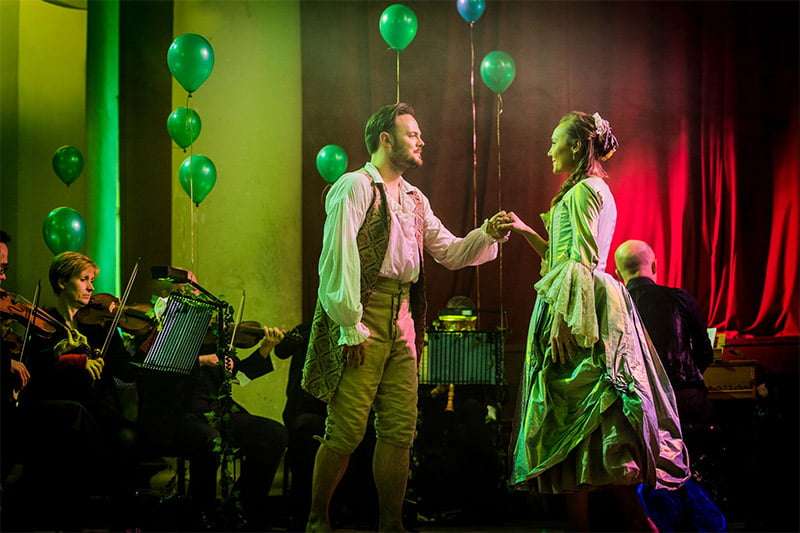 The one dramatic element that does work well is the occasional interaction of the singers with the musicians, reminding that the union between words and music is every bit as close in this masque as in fully-fledged opera. Perhaps recalling the similar directorial idea of Jean-Pierre Ponnelle’s film versions of Monteverdi’s operas, Laurence Cummings takes an active role by singing the brief tenor solo of the opening chorus; teasing and being teased by Acis, Galatea, and Damon; and more potently still, handing a sword to Acis during his air ‘Love sounds th’alarm’ as the latter contemplates action against the vengeful cyclops, Polyphemus, just as Nikolaus Harnoncourt in Ponnelle’s The Return of Ulysses, hands Iro the knife by which he kills himself. But subsequently that was rendered meaningless and anti-climactic here in an apparent confusion of myths by Parr when Polyphemus kills a now unarmed Acis, not with that or any other sword or club, but by smothering him with a cloak or fleece like the poison-lined garment with which the jealous Deianira enfolds Hercules.

Musically the performance is rather more coherent as Cummings leads the London Handel Orchestra in an account of the ebullient score with clarity and acumen, if lacking some bite. Nick Pritchard and Lucy Page dramatise the lead parts sweetly and lyrically on the whole, though Page occasionally sounds a touch shrill. Jorge Navarro Colorado projects the music of Acis’s fellow-shepherd, Damon, with a shade more vigour and sonority, if slightly tangled in some of the coloratura of his first air. But Edward Grint rightly makes a fearsome, powerful impression as the raging, jealous Polyphemus on his first appearance as he seeks to destroy Acis and Galatea’s love, though some of his phrases in the recitatives are more declaimed than musically enunciated. The members of Pegasus articulate the choruses crisply, and make a beautifully hollow mournful sound as they lament the shepherd’s death in ‘Mourn, all ye Muses’. Overall the colours of the music are more subtly drawn than those of the production.