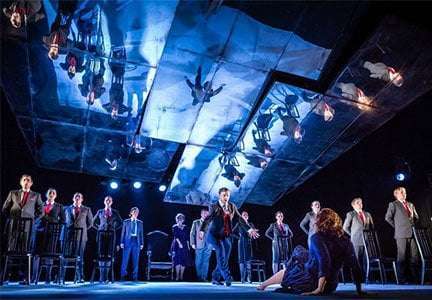 The London Handel Festival’s second operatic production this year is Ariodante (1734) – the first work Handel presented at Covent Garden when he moved his opera company there. Uniquely in his opera output he interpolated a series of dances into his stage works that season (including Alcina and a revival of Il pastor fido) for a visiting French troupe. They are not given in Paul Curran’s production at the Royal Academy of Music, but that is consistent with a staging hardly marred by any extraneous or distracting effects. The brief and unexpected choreography accompanying the chorus’s number at the end of Act One only served to underline with dramatic irony the premature celebration of Ariodante and Ginevra’s forthcoming marriage (and his future accession to her father’s throne). By this point of the elaborate plot is well under way. Angharad Lyddon’s oleaginous but unflappable Polinesso has devised a hateful scheme (out of jealousy) to ruin these festivities by making it appear to Ariodante that Ginevra is unfaithful with Polinesso – this to be accomplished by using Dalinda (disguised as Ginevra) as an unwitting pawn in this deception.

The generic business-suits worn by the men and women of the chorus, and the varied distributions of high-backed chairs throughout the action (this production’s only props) cogently suggested that the dehumanising, faceless etiquette of honour underpinning royal dynastic succession was transferred to the context of executive control over a corporate boardroom, as also did Polinesso’s visible scheming via his mobile phone. What looked like an overall hand fetish during Ariodante’s pledge of love to Ginevra’s proffered limb in the Act One duet ‘Prendi da questa mano’ adroitly pointed up the sardonic 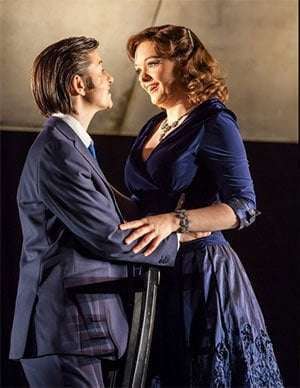 contrast with Ginevra’s pious devotion to the hand of her father later on, which would consign her to capital punishment on account of her presumed breach of his regal/corporate honour. For all the humanity displayed in Samuel Queen’s tender farewell to Ginevra, the King is, at that point, also as much a victim of those impersonal codes of public propriety and of his willingness to believe Polinesso’s appeal to “Duty, Justice [and] Love”. All the while it is Ginevra’s constancy and faithfulness which shows up the emptiness of this by surviving the deception and receiving Ariodante’s vindication when he finally appears to defend her.

A large mirror – consisting of conjoined panes, and suspended at an angle above and behind the stage – hinted at the hidden motivations of the characters, particularly coming into its own in Act Two by radiating Jake Wiltshire’s atmospheric dark-lilac lighting, which set the mood for the unfolding of Polinesso’s plot and served as a counterpoint to Handel’s musical depiction of the moon’s rise in the Sinfonia. At the moment of Ariodante and Ginevra’s triumph in the joyful Act Three duet, the mirrors literally reflected their amorous embraces as they lay down – as though on their conjugal bed – which would not otherwise have been apparent to the audience.

It is fair not to expect absolute vocal perfection from a cast of student singers. Nevertheless, distinctive characters did emerge with almost all the soloists sounding more confident by the end of the performance, testament to the belief undoubtedly shown in them by Jane Glover, leading with her usual zest and aplomb in the pit. Anna Harvey’s Ariodante retained innocence and freshness throughout, with ‘Scherza infida’ expressed as a matter of outrage rather than a self-pitying lament. Harvey controlled her coloratura much-better in Act Three, resulting in vocal clarity for ‘Dopo notte’, the opera’s musical climax. Rosalind Coad’s vocal fireworks as Ginevra became more focused too, from a certain amount of wobble at first to a clear, incisive timbre as she asserted her innocence. A somewhat more demure characterisation of the part might have been closer to what Handel had in mind, but Coad’s somewhat raunchy depiction perhaps made it more credible to believe that Ariodante and the King could doubt her fidelity in the first place.

Rhiannon Llewellyn as Dalinda (Ginevra’s lady-in waiting) was the most consistently satisfying role in terms of musical projection and interpretation, by no means becoming a mere foil for her mistress. Queen’s delivery of the King’s recitatives sounded almost declaimed, rather than precisely pitched, but there was a better and nobler lyricism in his arias, something which Ross Scanlon did not quite achieve as Ariodante’s brother, Lurcanio. The Academy Baroque Orchestra responded well to the shifting emotional worlds of the succession of arias, but there was some weakness in the solo trumpet and bassoon parts.

On the whole this production cohered as another, highly creditable, venture which the RAM and London’s other conservatoires are increasingly offering to the public and demonstrates that an intelligent use of minimal resources and of interpretative subtlety go a long way when staging Handel.